Close to 100 leaders of the Daf Yomi community flocked to Flatbush to learn more about the Agudah’s upcoming Global Siyum Hashas of Daf Yomi taking place at MetLife Stadium on Wednesday, January 1st, 2020.

Agudah executive vice president Rabbi Chaim Dovid Zwiebel welcomed participants warmly at Agudas Yisroel Bais Binyomin, introducing Agudah chairman of the board Shlomo Werdiger who spoke about the unprecedented wave of hasmada that has taken place in recent months, as excitement for The Siyum continues to build in every corner of the world.

Numerous global initiatives to promote limud haTorah have inspired thousands to be kovea itim as The Siyum draws near. 7,458 lomdim in 189 shuls and groups worldwide have dedicated themselves to completing Shas 85 times as part of the Chavrei Hasiyum program, with many other groups committing themselves to additional limudim. 30,000 children in thousands of schools in cities and countries all across the globe are already part of the Masmidei Hasiyum program, with more expected to join the dynamic initiative in the coming weeks and months. The Daf Yomi Chabura has created an atmosphere that has drawn in hundreds, giving lomdim a personal connection to The Siyum and creating an infrastructure that centers their daily lives around their limudim.  Also discussed was the Yom Hashishi video series that has tens of thousands of viewers enjoying weekly divrei Torah linking Parshas Hashavua and the Daf offered by noted luminaries of the olam haTorah.

Addressing the global nature of The Siyum, several speakers spoke about efforts being made in various kehillos to ensure that each one plays a vital role in the celebration, including the Chasidish, Sefardic and Yeshivish communities. Special emphasis was also placed on those who live outside the greater New York area, with outreach efforts being made to include their full participation as well. R’ Shmuel Yosef Rieder shared several important details about The Siyum whose 1 PM start time will maximize daylight and warmer temperatures while also facilitating greater participation in Europe and Israel. R’ Rieder noted that exceptionally tight security will be in place for this monumental event. Also mentioned were multiple enhancements to the program that will make this historic gathering even more inspirational and exciting including situating the stage on the center of the stadium floor and having sign language interpreters in place to benefit the hearing impaired community. There will also be several high quality publications which will be distributed to every participant at the Siyum.

Among those who spoke at the meeting were Agudah executive director Rabbi Labish Becker, Chaim Meyer Markowitz, Lefkowitz Leadership Initiative director and Chavrei Hasiyum coordinator Rabbi Shai Markowitz, Rephael Netanel and Agudah executive vice president of The Siyum, Rabbi Shlomo Gertzulin, who discussed the event’s ticketing process. Demand for tickets to The Siyum has skyrocketed, said Rabbi Gertzulin, with tens of thousands of tickets already sold during the advance ticketing period that offered priority seating to active Daf Yomi learners in recognition of their years’ long commitment to the Daf. General ticket sales for The Siyum will open on Monday, August 19th opening up a window of opportunity for those wishing to attend the global Siyum Hashas in person and be part of this epic event that will take its place in the annals of Jewish history.

“As Klal Yisrael has Baruch Hashem grown exponentially since the last siyum, and so have the lomdei Daf Yomi, kein yirbu,” said Rabbi Gertzulin, “we expect the demand for ticket sales to be off the charts. The excitement, passion, and enthusiasm is once again unprecedented and we look forward to Klal Yisrael celebrating together.”

Siyum executive committee member Dr. David Diamond who attended the event said that the achdus and energy in evidence so far has been unprecedented.

“While so many people are ticking off the days until The Siyum, I am already counting down the minutes until this inspiring display of k’vod shem shomayim unfolds,” said Dr. Diamond. “We look forward to an even greater increase in limud haTorah and kvias itim laTorah as all of Klal Yisroel joins together to be mikadesh shem shomayim b’rabim at MetLife Stadium on January 1st.” Sign up for The Siyum emails online at www.thesiyum.org or text SIYUM to 313131. 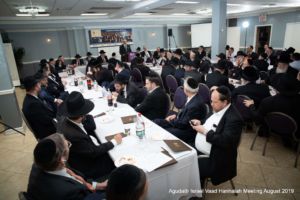 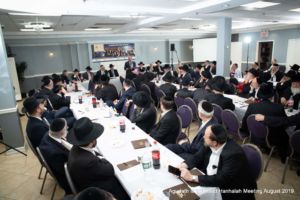 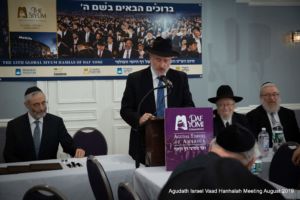 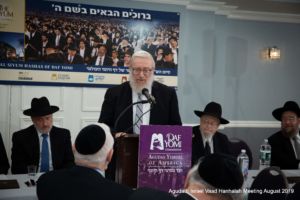 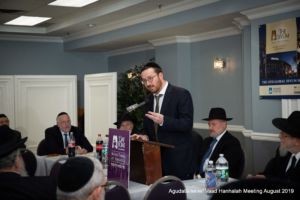 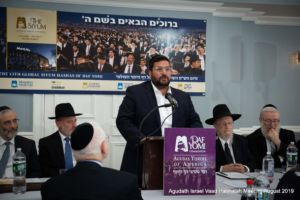 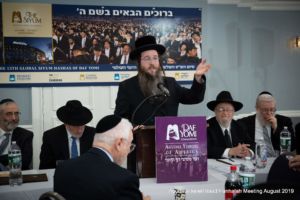 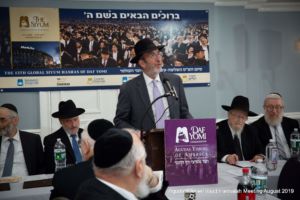