Actualizing Dreams: Excitement builds to a Crescendo as Daf Yomi Siyum Berachos is upon Us

Actualizing Dreams: Excitement builds to a Crescendo as Daf Yomi Siyum Berachos is upon Us
Print 🖨 PDF 📄

In their wildest dreams, no one ever imagined anything like this happening.

But just two months after hundreds of thousands worldwide took part in The Siyum, the ranks of lomdei Daf Yomi have swelled by tens of thousands of new recruits, with lomdim of all ages and from all walks of life preparing to celebrate the culmination of Maseches Berachos this coming Shabbos, Parshas Tetzaveh-Zachor, on March 7th.

Energized by the momentum of the Siyum HaShas, an unprecedented number of people have joined the daily learning regimen, a contemporary actualization of all that Rav Meir Shapiro foresaw nearly a century ago in Lublin. The study of Daf Yomi has proliferated exponentially, with some shuls hosting shiurim for the first time, and with others seeng increased attendance and new time slots added as their programs have grown to accommodate the increased demand. Multiple publications and digital platforms have made Daf Yomi ever more accessible, with shiurim given by highly respected magidei shiur representing the full spectrum of Klal Yisroel available worldwide at any time of day or night.

Nearly 60 dafim into their 2,711 day-long journey through Shas, participants are eagerly anticipating the first siyum of the 14th Daf Yomi cycle, the completion of the final daf of Maseches Berachos coinciding with Parshas Zachor. As in the past, Agudath Israel of America’s Daf Yomi Commission will organize livestreaming of the Worldwide Siyum for each masechta hosted by communities from across the globe, with Scottsdale, Arizona, the host of the Berachos siyum on March 5th. The number of lomdei hadaf who will be completing the masechta in Scottsdale and neighboring Phoenix has increased tenfold over the past seven and a half years, a growth that mirrors the incredible overall increase in Daf Yomi study throughout the world.

Of course, those who didn’t start Daf Yomi with Maseches Brachos are warmly encouraged to enlist in the program as Maseches Shabbos gets underway on March 8th. Assisting lomdim as they make their way through every masechta, the Daf Yomi Commission has sent congratulatory flyers to participating shiurim to mark the siyum on Brachos, as well as a comprehensive list of dozens of seforim that are readily available, to assist them in their upcoming journey through Maseches Shabbos. Visitors to www.agudah.org/dafyomi can find a growing listing of over 2,000 Daf Yomi shiurim throughout the world, making it easy to keep up with the schedule even while traveling.

Observing the Daf Yomi cycle moving on from Brachos to Shabbos just before Purim is particularly apropos, with Chazal explaining the pasuk from Megilas Esther, ‘layehudim haysa orah’ equating ‘orah’ with Torah. “Daf Yomi is akin to the call of ‘mi laHashem eilay,’ noted Rabbi Bamberger. “The bnei Levi rushed to heed Moshe Rabbeinu’s call and today, we see tens of thousands who came running to learn Daf Yomi following the Siyum HaShas. It’s important to recognize that those who are being mesayem Brachos have truly accomplished a major achievement. Now, as we begin Masechta Shabbos, we look forward to seeing even more people making Daf Yomi an integral part of their daily lives.” 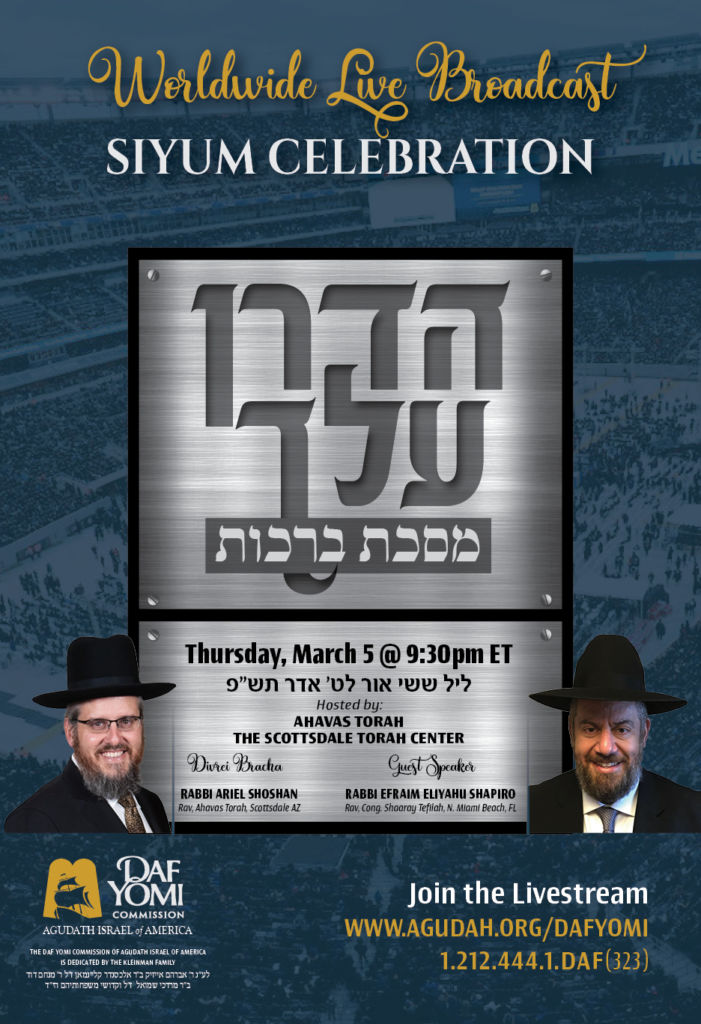