Children’s safety is a top priority for any community. In a time when anti-Semitism is on the rise, and after the horrific Jersey City shooting and Monsey knife attack, especially, it has become an even higher priority for Agudath Israel. That is why the Agudah applauds the efforts of Assemblymembers Daniel Rosenthal (D- Kew Gardens Hills) and Stacey Pheffer Amato (D- Far Rockaway), who have called upon the New York State Legislature to increase security funding for nonpublic schools in the upcoming budget.

The current budget allocation for nonpublic school security is $15 million annually. Rosenthal and Pheffer Amato proposed that New York double its allocation to $30 million, to protect children against the dangers caused by rising anti-Semitism.

“I hear daily from individuals, schools, and houses of worship about their security concerns in the wake of these attacks,” said Assemblymember Rosenthal. “Anti-Semitism has no place in New York; this funding affirms our commitment to protecting our children.”
In a similar vein, Assemblywoman Stacey Pheffer Amato said, “I am hopeful that this funding will be granted so that a measure of peace can be felt by those who may be targeted, and so that we join together to demonstrate our stand against hate.”

Agudath Israel has long been involved with efforts to increase security funding for our children, having called, successfully, for the expansion of the NPSE grant to cover a wider range of security needs, and for the original grant allocation of $5 million to be tripled. But this has become an even greater concern now, said Rabbi Yeruchim Silber, director of New York government relations for Agudath Israel. “With the dramatic spike in anti-Semitic incidents, security is foremost on our minds these days. We thank Assemblymembers Rosenthal and Pheffer Amato for taking the lead on this critical issue and we call on their colleagues to join them.” 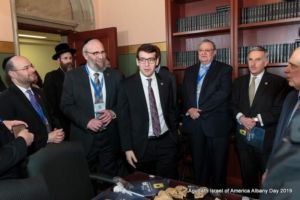 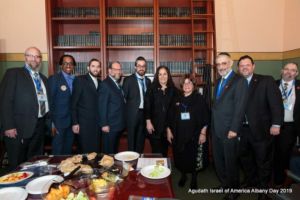