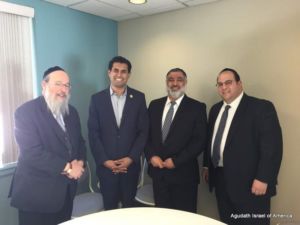 In what is being hailed as an important victory, the New Jersey State Senate has passed a bill that extends the current provisions for religious accommodations in all state universities to also cover attendance and classwork.

Senate Bill S2397, sponsored by Senator Vin Gopal, builds on existing legislation that prevents state universities from penalizing students who cannot take tests on particular days because of their religious beliefs. Under the new law, that accommodation would go one step farther, preventing students from being subjected to consequences should they miss class or be unable to complete assignments on a particular day for religious reasons.

“In some calendar years, the Jewish holidays fall out on weekdays, creating many hardships for religiously observant students,” explained Rabbi Avi Schnall, New Jersey director of Agudath Israel of America. “This legislation will expand the religious accommodation so that students cannot be penalized for their observance of religious holidays.”

The measure passed the Senate by unanimous vote and a companion bill has been introduced in the Assembly by Assemblyman Gary Schaer.

“We are hopeful that the Assembly will pass the companion bill shortly so that it can be signed by the governor before the fall Jewish holidays in order to avoid the problems that have arisen in the past,” said Rabbi Schnall.