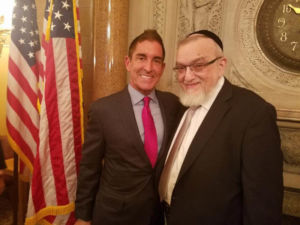 The delegation impressed upon each of the elected officials the importance of providing meaningful support for non-public school parents struggling to afford tuition. Last session, the state provided an additional $100 million dollars for Jewish nonpublic school families through the efforts of Agudath Israel of America and its coalition partners and the leadership of many elected officials.

Agudath Israel’s delegation discussed several new proposals and came away hopeful that these ideas will bear fruits in the upcoming session.