At the end of April, the Conference of Synagogue Rabbonim, Agudath Israel of America’s rabbinic association, issued a statement warning the Jewish public that loans taken out from Detroit-based Quicken Loans would run afoul of Jewish religious law’s prohibition of interest-taking, or ribbis. That issue has now happily been resolved. 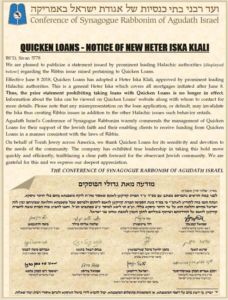 A technical solution that can permit problematic loans is a financial arrangement known as a heter iska. The respected rabbinical group is now informing the public that Quicken Loans has approved use of a heter iska, enabling Jews to use the lender without transgressing the ribbis prohibition.

Agudath Israel spokesperson Rabbi Avi Shafran noted that the heter iska does not retroactively reclassify existing loans issued before the heter iska was adopted. Nevertheless, he explained, since Quicken Loans’ practice is to sell all loans shortly after origination, many leading halachic authorities approve the continued use of these loans when they are no longer owned by Quicken Loans, without further corrective action.”

When the ribbis issue was first raised, Quicken Loans’ founder and chairman Dan Gilbert announced that he was assembling a committee to research the subject to, in his words at the time, “find a solution that the observant Jewish community, as well as our legal and capital markets team, finds acceptable.” Which he did, resolving the issue.

Rabbi Shafran thanked Quicken Loans for its quick and effective action. “The lender acted with alacrity and responsibility,” he said, “and we are happy to notify the public that Quicken has provided a reliable solution for its Jewish customers.”

Gary Torgow, chairman of Chemical Bank, the largest bank headquartered in Michigan, knows Mr. Gilbert personally, and expressed his own “great appreciation” for Mr. Gilbert’s quick action on the matter. “Dan Gilbert and his team at Quicken Loans wonderfully demonstrated deep sensitivity to the concerns of Jews around the world with his decisive action on this issue.”

“I’m extremely gratified,” Mr. Torgow added, “that Dan’s determination to do what needed to be done will benefit so many members of the Jewish faith.”