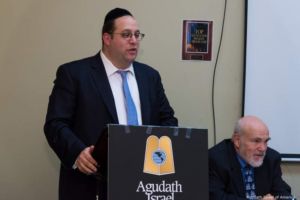 An informative workshop presented by Agudath Israel of America’s New Jersey office addressed what has become a hot button issue throughout the New York-New Jersey metropolitan area: land use and zoning regulations that affect the construction of vital Jewish community institutions. 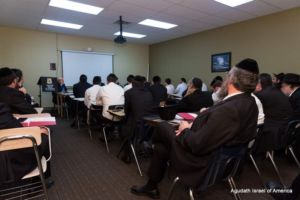 Rabbi Mordechai Biser, special counsel for the Agudah, opened the evening by assuring participants that the recent uptick in new laws and regulations enacted to stem the continued spread of the Orthodox Jewish community was high on the Agudah’s list of priorities. Rabbi Biser noted that considerable efforts are being expended to fight these laws on numerous levels and encouraged any other communities experiencing similar problems to contact the Agudah offices.

Attorneys Roman Storzer, Chris Costa, Donna Jennings, Sieglinde K. Rath and Robert Greene addressed a variety of issues – including understanding when approvals are required, how to legally obtain approvals and becoming acquainted with existing legal protections for religious institutions. The importance of seeking legal advice and engaging with local officials before attempting to create a shul, eruv or mikvah was stressed numerous times throughout the evening.

“You need to do the legwork and then proceed so that things can be done properly right from the beginning, otherwise you are just setting yourself up for failure,” said Rabbi Avi Schnall, director of the Agudah’s New Jersey office. “Know what has to be done before anything gets started because the situations that end up posing the biggest problems are the ones where things weren’t done correctly at the outset.”

Communities such as Jackson and Toms River have seen an explosion of Jewish residents in recent years as those priced out of the housing market in established areas have been looking at nearby neighborhoods that offer close proximity to much needed Jewish institutions, but at more affordable prices.

“People can’t afford to live in places like Lakewood or Monsey anymore, but when they buy houses nearby they suddenly find out that they aren’t allowed to put up a succah,” observed Rabbi Schnall.

Rabbi Chaim Dovid Zwiebel, executive vice president of the Agudah, described the workshop as “trailblazing” and noted that the feedback from attendees has been very positive.

“This was an extremely important opportunity for serious people who want to do the right thing to learn practical pointers on how to start a new community,” noted Rabbi Zwiebel. “People walked away satisfied that they had gained solid guidance and information.”

While the land use workshop was the first of its kind for Agudath Israel, Rabbi Zwiebel said that similar events may follow, as part of the Agudah’s continuing commitment to addressing the Jewish community’s needs as they evolve.

“The growing pains that our community has been experiencing are attributable to our growing numbers. As our growth accelerates, we face increasing resistance from local communities that fear our expansion,” said Rabbi Zwiebel. “It is important for people who are facing such resistance to know that there may be something that can be done to alleviate these problems.”