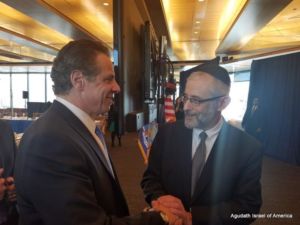 With rising anti-Semitic incidents around the country and in particular rising hate crimes across New York State, last February, Governor Andrew Cuomo announced that he would appropriate $25 million for security for yeshivas and other nonpublic schools. The Securing Communities Against Hate Crimes Grant Program provides grants to help strengthen security measures and help prevent crimes or attacks against these facilities because of their ideology, beliefs or mission.

At an event this morning in Magen David Yeshiva in Brooklyn, Governor Cuomo announced the release of the first round of grant awards. 61 yeshivas and other community facilities in Brooklyn were awarded a combined total of more than $5 million.

Agudath Israel of America applauds the Governor who has made the security of our students a top priority. Increased security funding has been and continues to be a major legislative agenda item for the Jewish community, and Agudath Israel has been in the forefront in advocating for increased funding for yeshivos over the past few years.

Rabbi Chaim Dovid Zwiebel, Agudath Israel’s Executive Vice President, noted that, “the Governor’s unwavering stance on anti-Semitism has distinguished him as a friend of our community. He has put his office and prestige behind a tangible proposal to protect religious institutions. Those institutions will now be able to reap the fruits of this initiative in the form of more secure facilities and greater protection for yeshiva and other nonpublic students throughout the state. We are truly grateful for his leadership.”

We are living in dangerous times and our institutions need to do everything they can to keep the children safe. This special allocation will go a long way in helping them secure their facilities.”