Agudath Israel applauds Governor Cuomo for his proposal to include in his 2021 Executive Budget the allocation of an additional $25 million in security grant funding for organizations vulnerable to hate crimes, and for his proposed expansion of eligibility for these security grants to include not only schools, non-profit day care centers, community centers and cultural museums, but houses of worship as well.

His recent trip to Poland to mark the 75th anniversary of the liberation of Auschwitz- Birkenau says much about his sensitivity to history and the wages of unchecked hatreds. It, like his continued support of institutions at risk for hate crimes, is deeply appreciated by the Jewish community.

Said Rabbi David Zwiebel, executive vice president of Agudath Israel, “At a time when Jewish people and Jewish institutions are increasingly the target of violent haters, the friendship of our friends is appreciated all the more. Governor Cuomo has once again proven himself a true friend.” 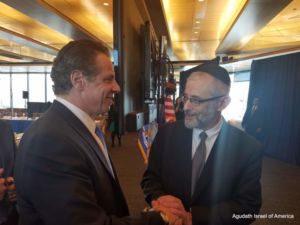 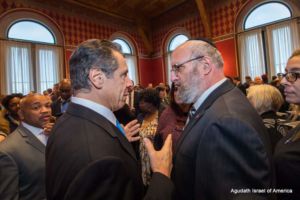