Agudath Israel Calls on IRS to Narrow Scope of Proposed Regulations: “Don’t Undermine the Scholarships of Thousands of Students”

Agudath Israel Calls on IRS to Narrow Scope of Proposed Regulations: “Don’t Undermine the Scholarships of Thousands of Students” 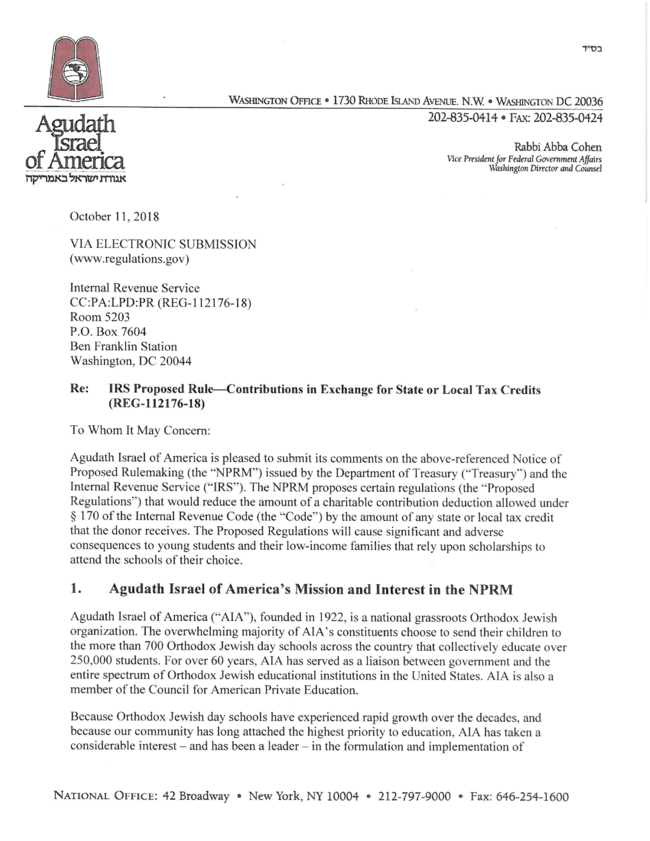 Agudath Israel of America’s letter to the Internal Revenue Service

Agudath Israel of America urged the Internal Revenue Service (IRS) last week to revise proposed regulations that could undermine school choice programs in many states and jeopardize the scholarships of thousands of students. This would include the approximately 6500 students currently using tax credit scholarships to attend Jewish schools.

Scholarship tax credit programs, which at present operate in eighteen states, offer taxpayers a state tax credit, generally ranging from 50-100%, in return for a donation to a scholarship granting organization. The scholarship organization then distributes those funds to eligible, mostly low-income, students to attend the private school of their choice. Agudath Israel has played a key role in advocacy and implementation efforts pertaining to scholarship tax credit programs in at least ten states, as Jewish families benefit greatly from the tens of millions of dollars in scholarship funding generated by those programs.

Despite a statement from Treasury Secretary Mnuchin stating that the Trump Administration supported school choice and that the IRS believed that, “only about 1 percent of taxpayers will see an effect on tax benefits for donations to school choice tax credit programs,” the feedback received from scholarship programs told a different story.

“Agudath Israel reached out to many scholarship organizations and heard similar sentiments of concern that the new regulations could potentially cause their biggest donors to withhold future contributions,” says Rabbi A. D. Motzen, Agudath Israel’s national director of state relations. “They felt that this could devastate these programs, leaving thousands of low-income students without a scholarship.”

The nine page comment, principally authored by Providence attorney Marc (Menasheh) Lewin, Esq., who acted as counsel to Agudath Israel, with the advice and input of Baltimore attorney Stuart Schabes, Esq., argued that the proposed regulations represent a reversal of decades-old tax policy, and went on to offer specific recommendations that would help the IRS achieve its stated policy goals without jeopardizing scholarship programs. The Agudath Israel submission was part of a collaborative effort of a coalition of national advocacy organizations, and the many scholarship organizations which provided helpful guidance and data.

“Agudath Israel has made a compelling case to Treasury Secretary Mnuchin and the IRS to narrow the scope of the proposed regulations,” says Rabbi Abba Cohen, Agudath Israel’s Vice President for Federal Government Affairs. “Our message is clear: Please don’t undermine the scholarships of thousands of students!”

Agudath Israel has requested to testify at the public hearing scheduled for November 5th.