We asked. They listened.

Over the last few months, you received several action alerts from Agudah about security grants. We asked our members and the wider Jewish community to contact Congress about the importance of the Nonprofit Security Grant Program. We asked Congress to fully fund this critical program, and a few days ago, they listened. The new spending bill included $60 million for the program!

Hundreds of institutions, some of them likely in your community, will be eligible for grants of up to $150,000 to protect their institutions from terrorist attacks. 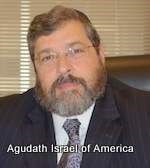 Agudath Israel of America is pleased to congratulate Rabbi Abba Cohen, Washington director and counsel and long-standing vice president for federal affairs, on being named to the broader position of vice president for government affairs.

Appointed to the Agudah’s fledgling office in Washington D.C. thirty years ago by Rabbi Moshe Sherer z’l, Rabbi Cohen has distinguished himself as an exemplary and respected advocate for the Jewish community in our nation’s capital. Knowledgeable, experienced and a true public servant who has represented the Agudah on a variety of matters both to the federal and to foreign governments, Rabbi Cohen’s efforts have paved the way for many successful initiatives that have brought significant benefits to the klal.

During his tenure he has worked with successive congresses and administrations in crafting and promoting numerous laws and regulations enhancing the religious rights of individuals and institutions in the Jewish community and strengthening the interests of, and benefits provided to, its faith-based schools and social programs.

In addition to his responsibilities at Agudath Israel, Rabbi Cohen was appointed to the U.S. Commission for the Preservation of America’s Heritage Abroad by then-President Obama in June 2015. The Commission is entrusted with protecting and restoring foreign sites of cultural and religious heritage, which may include shuls, cemeteries, yeshivas and other Jewish landmarks. Among other notable achievements, he was the recipient of an award from the U.S. Department of Homeland Security for assisting the Transportation Security Administration in enhancing protection of the civil and religious rights of Jewish travelers.

Rabbi Cohen’s new title reflects the Agudah’s ever-growing foreign and domestic agenda in Washington, and its efforts that have led to accomplishments benefiting the Jewish community on the federal, state and local levels. Describing Rabbi Cohen as an essential member of the organization’s executive leadership team, Agudah executive vice president Rabbi Chaim Dovid Zwiebel hailed Rabbi Cohen for his decades of dedication and achievement.

“This new title, bestowed upon Rabbi Cohen as he approaches his 30th anniversary of service to Agudas Yisroel, reflects his enhanced stature in carrying out the historic advocacy mission of the Agudah,” said Rabbi Zwiebel.

Rabbi Cohen said that he was gratified by the new title which better conveys the Agudah’s continuously evolving scope of activities.

“To see our Washington agenda grow is inspiring and will encourage further engagement with more people on more fronts,” said Rabbi Cohen. “With government and other officials gaining a better appreciation of our dynamic involvement in an even wider array of areas, we will iyH see enhanced opportunities to assist our community in meaningful ways.” 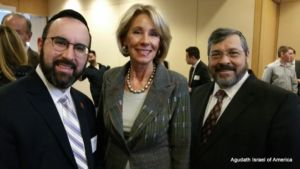 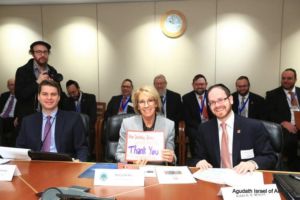 Bradley Byrne (R-AL) for leading the effort to increase school choice for families nationwide. The Education Freedom Scholarships and Opportunity Act they unveiled today will provide billions of dollars in tax credits to support state-designed scholarship programs. Providing a dollar-for-dollar tax credit will encourage individuals and businesses to invest in education.

Currently, 18 states have scholarship tax credit programs which have helped hundreds of thousands of students attend the school of their choice, public or private. Jewish day school families, among many

others, have been beneficiaries of such programs. A federal tax credit would enhance existing programs and allow states to provide more educational options to all of their students.

Rabbi Abba Cohen, Agudath Israel’s Vice President of Government Affairs was one of the invited guests at the Department of Education event where the details of the bill were unveiled this morning. Following the event he said, “We encourage lawmakers, Republican and Democratic, to put a bipartisan stamp on the common-sense policy that is at the heart of this bill: assisting parents to provide the learning environment that is the best fit for their child.” 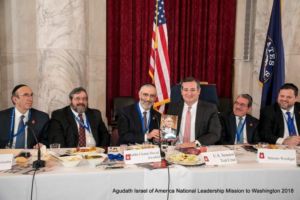 Senator Ted Cruz (R-TX), One of the Sponsors of the Education Freedom Scholarships and Opportunity Act, at the Agudah National Leadership Mission to Washington 2018. Seated with him are (Left to Right) are: Rabbi Shlomo Gertzulin, Agudah’s Executive Vice President for Finance and Administration, Rabbi Abba Cohen, Agudah’s Vice President for Government Affairs and Washington Director and Counsel. Rabbi Chaim Dovid Zwiebel, Agudah’s Executive Vice President, and Agudah Board of Trustees Members Shlomo Werdiger and Chaskel Bennett.

“Agudath Israel has played a key role in advancing school choice across the nation, yet half of the states in this country have not yet enacted a state program,” said Rabbi A. D. Motzen, Agudath Israel’s National Director of State Relations. “Offering a federal incentive and allowing scholarships to be used for a broad range of educational expenses is exactly what is needed to encourage all states to opt in to this major investment in education.” 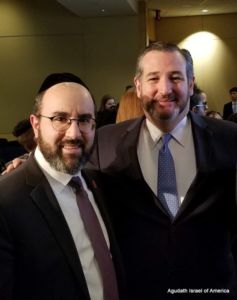 On Tuesday, March 5th at 2:30 p.m. EST Agudath Israel will be hosting a webinar/conference call to discuss the details of the bill, what it can mean for our community, and ways to help this effort succeed.