As the 2017 New York State legislative season came to a close, leaders of Agudath Israel’s Government Affairs team visited the capitol to thank lawmakers for their efforts. This season saw significant accomplishments in aid to Jewish and other nonpublic schools, as well as in other areas of importance to the broader Orthodox Jewish community. 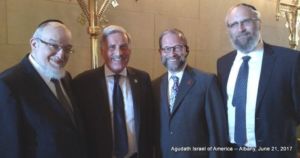 The delegation was comprised of Rabbi Shmuel Lefkowitz, Agudath Israel’s Vice President for Community Affairs, who has spent decades advocating in Albany; Leon Goldenberg, member of Agudath Israel’s Board of Trustees and host of the popular radio show Community Matters; together with the newest member of the team, Rabbi Yeruchim Silber, who joined the organization earlier this year as Director of New York Government Relations. Rabbi Silber has been in Albany for parts of almost every week of the legislative session, working on current issues and building new relationships.

As in the past, Agudath Israel’s prime undertakings were in the area of education, which has been a focus of the organization’s advocacy for decades.  This year saw major accomplishments in the following areas:

Security: This was a major priority for Agudath Israel this session in Albany. The budget passed in April included a proposal championed by Governor Cuomo, which allocated an additional $25 million toward security for at-risk nonpublic schools, community centers and day care facilities.  This new source of security funding follows the state more than tripling its annual allocation for nonpublic school security last year, in response to an advocacy effort led by Agudath Israel and others, from $4.5 million to $15 million. This funding was reallocated again this year.

Smart Schools Bond Act (SSBA):The SSBA, a $2 billion commitment by New York State toward improving education for public schools, includes a provision for technology items to nonpublic schools.  For over a year, Agudath Israel has been at the forefront of advocating that the funds allocated to nonpublic schools under the SSBA are wholly inadequate from a legal and equitable perspective. After multiple hearings at the Governor’s office and before the Senate on this topic, Agudath Israel was pleased to see the budget grant an additional $25 million toward certain technology equipment for nonpublic schools, of which Jewish schools will receive a significant share.  More significantly, the budget directs the SSBA Review Board to disapprove district plans not in accordance with the correct methodology.

Comprehensive Attendance Policy (CAP): In another chapter in a decade-long saga, the state budgeted $60 million to repay the CAP debt to

nonpublic schools.  Comprehensive Attendance Policy (CAP) funding is one of most significant state sources of funding to Jewish schools.  Nearly a decade ago, Agudath Israel led the nonpublic school community in identifying a flaw in the funding formula, which resulted in an unjust shortfall of millions to nonpublic schools.  Over the past two years, a whopping $250 million has flowed to nonpublic schools to repay that debt.  Agudath Israel estimated the shortfall at $330.2 million dollars.  In Albany this year, one of the organization’s goals was to retain that final $80.2 million.  With $310 of the total estimated $330.2 million paid or budgeted to be paid, the state is close to finally, and fully, closing this gap.

Immunization Reimbursement:Last year, Agudath Israel conducted a detailed survey of 63 schools to determine the correct reimbursement rate for nonpublic schools complying with the mandate to track immunizations. The current rate is pegged at 60 cents per child in NYC, Rochester and Buffalo, set in 1984 and never updated. The Agudath Israel survey revealed that nonpublic schools have been shorted $7.7 million dollars for immunization reimbursement; the correct reimbursement rate is nearly $30 per child. This year the legislature corrected this flaw by allocating $7 million in response to our pleas.  This will be a recurring, well-deserved new funding stream to private schools.

The delegation found some receptive ears for aid to yeshivas and parents among the legislators. “We respect and embrace those that want appropriate education for their children,” declared Senate Majority Leader Flanagan. “Many do not have the means, but scrape and save and do everything conceivable to make sure their children have a really solid, faith- based education.” 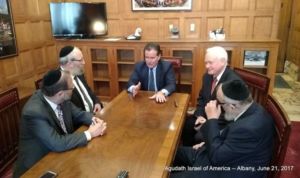 Added Senator Elaine Phillips, “Every child deserves an A-plus education. It is not for New York State to decide for a parent whether to place their child in a public school or nonpublic school, religious or non-religious. While I support fully funding our public schools, we have families that are paying taxes, have chosen a private school education, and they deserve something as well.”

In addition to education issues, Agudath Israel played an important role in a bill allowing batei dinim, rabbinical courts, flexibility to function on weekends, and was active in the fight to prevent a bill that would legalize physician assisted suicide.

This visit culminated a season of advocacy which saw numerous trips by the Agudath Israel team to Albany, including a major mission in March.

Rabbi Chaim Dovid Zwiebel, Agudath Israel’s executive vice president commented,”We have long since learned that, in advocacy, there is no substitute for developing personal and ongoing relationships with our elected officials. Agudath Israel constantly strives to enhance and broaden those relationships, and the results show.”

The lawmakers clearly appreciated Agudath Israel’s visits. “The fact that you are here so often truly makes a difference,” said Senator Catherine Young. “It’s important that we don’t lose focus on what we are doing. Your visits constantly remind us of that and I appreciate the sage wisdom I get from you,” she concluded.

Senator Marty Golden echoed a similar sentiment. “Your coming here gives us a sense that we don’t lose who we are and our values, and that we never forget the people we represent.”

While there were areas that were unfinished, such as tax credits for tuition paying parents and busing for special education, the accomplishments of this session were appreciated, and gives Agudath Israel’s Government Affairs team a renewed sense of vigor to come back again next legislative season and continue their advocacy.
(Photo Credits: Marc Gronich)