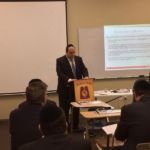 In a major victory for nonpublic school students in the Lakewood School District, school administrators, newly informed by Agudath Israel of the nuances and changes in federal law, were able to  gain greater access to Title I funding for their students.

One of the largest sources of funding for private schools, Title I is a federal program designed to help high need children in both public and private schools. Its latest iteration, known as the Every Student Succeed Act, or ESSA, would make a larger amount of Title I dollars and additional services available to nonpublic schools. In addition, multiple changes were recently made to the regulations that governed how these services would be provided.

As Agudath Israel’s New Jersey director, Rabbi Avi Schnall, acquainted himself with ESSA, he came across two aspects of the Title I distribution process that were not being fulfilled by the Lakewood Board of Education (BOE).  The first was that private school funds are allocated through a process called consultation, which requires the local BOE to meet with private schools to discuss how they intend to use their Title I funding. One-on-one meetings, which allow for some amount of give and take, typically give schools an opportunity to secure greater amounts of Title I funding and services.  However, many private schools in the Lakewood School District, were unaware that private consultations were available and instead they participated in a group consultation with the BOE informing them how much funding they would be receiving. In contrast to private consultations, group consultations provided no forum for further discussion about any additional Title I funding and opportunities for additional services.

A second aspect of the Title I process was a requirement that schools sign an affirmation saying that they were accepting the results of their consultation.   Lakewood private school administrators had actually been signing their affirmations for years as they walked into the mass consultation, locking themselves into whatever allocations had been made by the BOE before they even knew what they were, thereby forfeiting their right to pursue any further funding or services through the private consultation process.

The combination of these two factors had been having a detrimental result on Lakewood’s private school students for years, with schools missing out on the chance to enjoy their legally mandated piece of the Title I pie. Agudath Israel arranged workshops with administrators to bring them up to speed on  ESSA and advising them to come to the upcoming consultation meeting.  Schools were counseled not to sign the affirmation as  they walked into the group consultation as they had done in previous years, ensuring that they did not deprive themselves of the opportunity to their rightful share of the allocated Title I funding as outlined in ESSA.

After the school superintendent made her annual presentation, Rabbi Schnall posed two questions to BOE representatives.

“I asked them how the schools were expected to sign the affirmation if the Board of Education hadn’t discussed the issues that were relevant to them and how much money had been allocated to their particular school,” said Rabbi Schnall.  “I also asked the administrator of the Board of Education when every school would be scheduled for the one on one consultation that they were entitled to under state law.”

While BOE officials responded by saying that few changes had been made so there was no need for private consultations, Rabbi Schnall held the ESSA guidelines in his hand, demonstrating that Title I had undergone extensive modifications.

Since then, every yeshiva in Lakewood has been scheduled for a private consultation.  Agudath Israel has been working closely with each one to make sure that they are prepared for the meeting in order to be awarded the maximum allowable funding during their consultations.

The Agudah was also able to help schools receive the higher amount they now deserve by encouraging schools not to renew their previous year’s contracts with their Title I providers which would have shortchanged private school students that are now entitled to more funding and services under the ESSA.

“All of this came about when we started hosting workshops for the schools on Title I funding and we discovered that the private consultations that schools were entitled to had never been provided,” said Rabbi Schnall.  “Without a proper consultation, full funding and services can be totally lost, which is what had been happening in Lakewood for the last several years.”