Agudath Israel Joins Federal, State and City Officials in Urging Hospitals to Implement Volunteer Programs to Support Coronavirus Patients
Print 🖨 PDF 📄
Even heroes need some help every now and then.
With the outbreak of the COVID-19 pandemic, healthcare workers found themselves stretched thinner than ever by the unprecedented number of hospital admissions This has left them with little time to interact with patients and families. The already difficult realities of COVID-19 have been further exacerbated, with no visitation policies leaving patients isolated during their often-lengthy hospital stays, while their loved ones receive only sporadic updates on their conditions.
Recognizing the need to address those concerns, a group of advocates including representatives of Agudath Israel of America, has been lobbying elected officials to have hospitals implement volunteer programs that would provide patients with an extra layer of non-medical care while also bringing relief to overburdened healthcare workers.
Over 100 members of the House of Representatives, the New York State Assembly and Senate and the New York City Council have now signed on four separate letters urging hospital administrators and CEOs to create compassionate helper programs, keeping patients and their loved ones connected and providing companionship for those without relatives. The programs would have hospital-approved and trained caregivers in full personal protective equipment providing quality of life care and direct support. Volunteers would be assigned to patients, facilitating conversations with family members, providing loved ones with medical updates and overcoming potential linguistic and cultural barriers.
“We have already allowed too many people to die alone without having someone sitting at their bedside, giving them a drink or just talking to them, while family members are sitting at home, not knowing if they will ever see their loved one again,” said Assemblyman Joseph Lentol, who, together with 34 fellow Assembly members, sent the first letter to hospital executives on April 24th.
While legislation to enact a state-mandated compassionate helper program is already pending in both the New York State Assembly and Senate, Senator David Carlucci said that he believes that the issue is a human one and does not necessarily need to become a legislative effort when sessions resume in Albany once again.
“We are here to support hospitals and are looking for guidance from the health department to make sure that everything is done properly,” said Carlucci, whose April 29th letter was signed by 25 senators. “We are responding to stories we have heard and to fears we have heard from residents which have been really concerning.”
More than four dozen members of Congress and the New York City Council have also signed on letters supporting the previous missives sent by New York State Assembly and Senate officials supporting the need for compassionate helper programs.

“We believe that such a program will give peace of mind to patients and their families, as well as help lessen the strain on our frontline healthcare workers,” said Congressman Max Rose, who circulated the letter signed by many members of the New York congressional delegation. “We therefore offer our support for the creation of this program and stand ready to assist with any statutory or logistical challenges that may be an issue.” 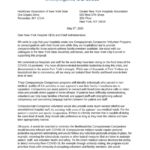 Letter from members of the United States Congress 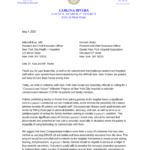 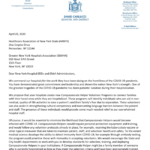 Letter from members of the New York Senate 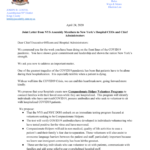 Letter from members of the New York State Assembly