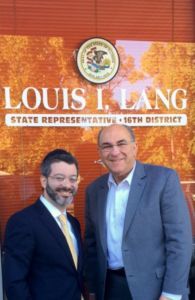 The recent wave of anti-Semitic incidents including bomb threats against Jewish institutions, vandalism to synagogues, and desecration of cemeteries, has resulted in considerable concern and angst in the Jewish community. Agudath Israel lauded the response of Illinois House Deputy Majority Leader Lou Lang (D-Skokie) who proposed legislation on Monday to provide $25 million in emergency security funding to at-risk non-profits. The bill already has a bi-partisan list of 16 co-sponsors.

The legislation, House Bill 4011 and House Bill 4012, would establish a $25 million grant-making program in the Illinois Secretary of State’s office and authorizes the Secretary to approve grants to at-risk nonprofit agencies and institutions based on detailed threat assessments. Financial assistance would be made available “on an emergency basis” to institutions to prevent or respond to attacks. Funds could potentially be used for security guards, target-hardening capital projects, and other security measures.

Lang, who has worked closely with Agudath Israel of Illinois for many years, represents a diverse constituency including a large Jewish community among other minority groups.

“I am unwilling to risk that these domestic terrorists will be content with hoax bomb threats; so, that’s why I am pushing a fast-track, $25 million anti-terrorist program to enhance security at non-profit facilities targeted by terrorism,” said Lang in a statement. He said he was encouraged by Governor Rauner’s comments at the Holocaust Museum last week where he proclaimed, “We cannot stay silent on hate.”

“While Illinois remains without a budget due to the political impasse, a security risk is not something that can wait to be addressed,” said Rabbi Shlomo Soroka, Agudath Israel of Illinois’ director of government affairs. “Representative Lang has once again proven to be responsive to the needs of the community.”