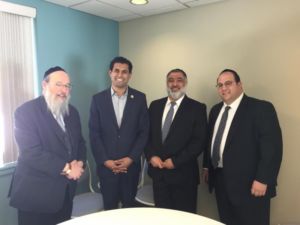 The meeting served as an opportunity to congratulate Senator Gopal on his recent election victory and to discuss several important issues for the community including religious accommodations for college students, the importance of avoiding unnecessary autopsies, and the need for increased nonpublic school funding.

“Senator Gopal is new to the Legislature, but he has been a power player in New Jersey politics for some time,” said Rabbi Schnall. “We are excited that he is now representing the Deal community in the State Senate as he has a keen understanding of cultural and religious sensitivities and recognizes the financial sacrifices and challenges of nonpublic school families. We look forward to continuing to build our relationship with Senator Gopal and the Deal community”