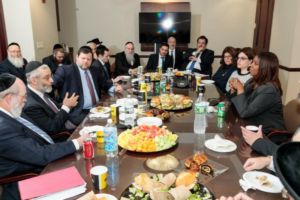 This week as part of its ongoing series of meetings with candidates for elected office, Agudath Israel welcomed NYC Public Advocate and Democratic candidate for NYS Attorney General Letitia (Tish) James to its Manhattan headquarters. Ms. James is no stranger to Agudath Israel having served in government for the last 15 years first as a NYC Councilmember representing a district that includes Crown Heights and then as Public Advocate.

The Agudah leaders presented Ms. James with some of the important issues facing the Orthodox Jewish community that fall within the purview of the AG including discriminatory zoning restrictions, religious freedom, and the educational integrity of the yeshiva system.

Agudath Israel met with the Republican candidate for attorney general, Keith Wofford, earlier this year where many of the same issues were discussed. Agudath Israel is a 501 (c) 3 nonprofit organization and does not endorse or oppose candidates for elected office.