Holmdel, NJ — Agudath Israel of America, American Orthodoxy’s leading voice, held its staff retreat this past July 25-26 at the futuristic Bell Works commercial hub in Holmdel, New Jersey. The full two-day conclave brought Agudath Israel leadership and staff from headquarters, affiliated divisions, and regional offices nationwide together with peers. Participants enjoyed a comprehensive and coordinated snapshot of Agudah’s every component and department, built camaraderie, shared achievements and planned for the future—all in an atmosphere charged with the cause of helping Klal Yisroel. 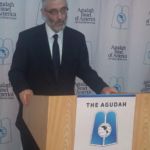 Rosh HaYeshiva of Lakewood’s Beis Medrash Govoha. In his chizuk address, Rav Olshin spoke powerfully about Agudath Israel’s ongoing role championing Torah and community issues. Rav Olshin also spoke movingly of how his own parents, young European immigrants in pre-War New York, found a haven in so many ways in the Aguda of those formative days. As a young bochur in the late 1920s, the Rosh HaYeshiva’s father received critical spiritual and moral support from Brooklyn’s early and energetic Agudah contingent, while the Rosh HaYeshiva’s mother drew regular inspiration from Agudah’s local Bnos. 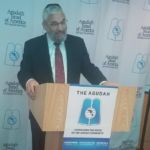 Reb Shia Markowitz, CEO of the Agudah- Reflecting on the Past; A Vision for the Future

Special guest and modern press legend Seth Lipsky capped the first day’s dinner with a question-and-answer session on perceptions of the Orthodox Jewish community in the secular media, and how to negotiate those perceptions. Mr. Lipsky is the founder of the New York Sun and the English-language version of the Jewish Daily Forward, and veteran of the Wall Street Journal, among others. He walked a rapt audience through an insider’s view on the modern media world, from old-school print institutions to cutting-edge online outlets and social media—and how to best get the most positive, proactive Torah messages to each. Mr. Lipsky also expressed a debt of gratitude to Agudath Israel and Rabi Chaim Dovid Zwiebel, its executive vice president, for a still-growing relationship.

“It is always impressive to get everybody together to share the many things Agudath Israel is doing,” said Executive Director Rabbi Labish Becker, “but even more significant are the results of the retreat– when the dedicated and capable staff plan the coming year and resolve to do even more for Reb Yisroel and Klal Yisroel.”