Agudath Israel of America Joins in Our Nation’s Grief Over the Passing of President George H.W. Bush

Agudath Israel of America Joins in Our Nation’s Grief Over the Passing of President George H.W. Bush
Print 🖨 PDF 📄 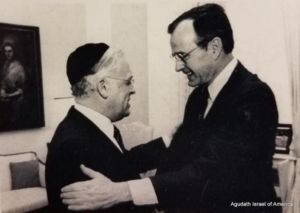 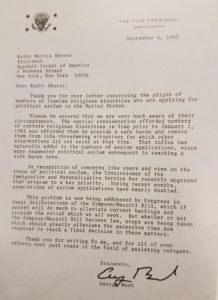 President Bush’s entire life was devoted to serving the United States, its people and its ideals — during war and peace, at home and abroad, in Congress and the White House. His wisdom, skill, statesmanship and temperament helped our country find stability, and break new ground on the world scene, during the very tenuous and uncertain post-Cold War era. He is admired, and will be remembered, for his readiness to exert America’s strength to protect its interests and allies.

On a more personal note, we remember well how warmly Mr. Bush — both as President and Vice President — engaged with Agudath Israel. He graciously welcomed Agudath Israel’s Washington Leadership Missions, joined by numerous members of the Cabinet and other high ranking administration officials. He invited our executive leadership on several occasions to small meetings to discuss various critical policy initiatives ranging from civil rights to child care. The President also worked closely with Agudath Israel and recognized its achievements in several areas, including our efforts concerning the plight of Iranian and Syrian Jews, the discrimination and anti-Semitism facing the Jewish community of Airmont, NY, and the groundbreaking neighborhood stabilization and revitalization programs we had undertaken in Brooklyn. Agudath Israel’s late revered leader, Rabbi Moshe Sherer, had a particularly close relationship with the President, and often was pivotal in voicing Jewish concerns to him on Israel’s security. 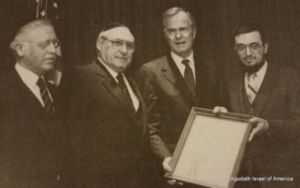 As the entire nation mourns, Agudath Israel expresses our deep condolences to his distinguished family. They should be comforted by the fact that they have admirably carried on the ideals of this great American leader and patriot.