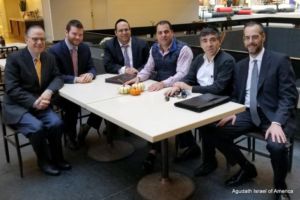 Agudath Israel of America commends New Jersey State Senator Paul Sarlo (D-Bergen/Passaic) for his introduction of S3647, a bill which aims to make hiring security personnel more accessible and affordable for houses of worship and nonpublic schools in the state.

The bill allows certain police officers to serve as security personnel at houses of worship and makes the process easier for nonpublic schools to hire these officers for less than the cost of private security guards.

“This bill will lessen the financial burden on synagogues and schools, allowing them to hire security personnel,” said Rabbi Avi Schnall, director of the New Jersey office of Agudath Israel, who assisted in the drafting of the bill. “We are grateful to Senator Sarlo for taking the lead on this important initiative. At a time when acts of violence targeting houses of worship and schools have increased, the state, working together with faith communities, must do whatever it can to protect its citizens.”