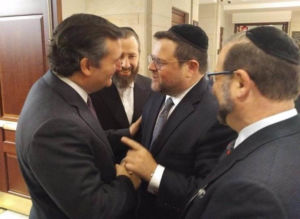 On Tuesday, activists and communal leaders from across the country converged on the nation’s capital for the opening session of the 115th Congress. Among those representing the Orthodox Jewish community were two members of Agudath Israel of America’s board of trustees, Leon Goldenberg and Chaskel Bennett. 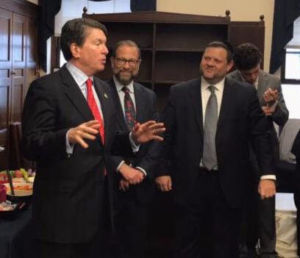 Throughout the day, the activists met with members of the House and Senate and their staffers about several issues, including the highly controversial UN Security Council resolution against Israel and the important role Congress must play in safeguarding the special US – Israel relationship. The job of an activist said Bennett is to “constantly create and nurture relationships with members and their staff, to advocate and advance the agenda and the interests of the Orthodox Jewish community. 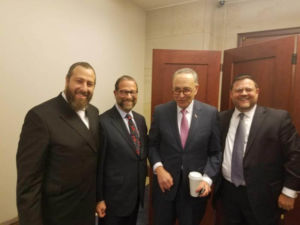 Mr. Goldenberg concurred, “with so much happening in the world it is extremely important for the Jewish community to have important relationships in Washington that we can call upon when needed.”

One priority for Agudath Israel is the Senate confirmation hearing for Education Secretary-designate Betsy DeVos which will take place on Wednesday morning. Agudath Israel has worked with Mrs. DeVos for many years advocating for school choice and thousands of families are benefiting thanks to those efforts. Agudath Israel submitted a  letter of support to the members of the committee in support of her nomination and urges its constituents to call their US Senator and ask them to publicly support the nomination of Mrs. DeVos.