In an exciting development for New Jersey’s Jewish residents, NJ State Senator Patrick Diegnan, Vice Chairman of the Senate Law and Public Safety Committee, announced that he will be a primary sponsor of Senate bill S2634, which will provide crucial security funding for New Jersey synagogues, non-public schools and other non-profit institutions. 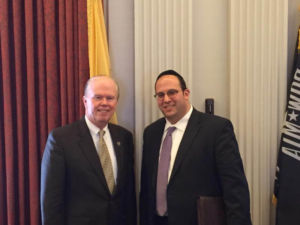 The Senate bill is identical to Assembly bill A4253, introduced by Assemblywoman Annette Quijano, Chairwoman of the Assembly Homeland Security Committee. The legislation allocates $500,000 a year for homeland security grants of up to $15,000 each. Grants will be distributed to New Jersey nonprofit organizations through a competitive process during which applying entities will articulate their security needs.

The funds in this legislation are in addition to federal homeland security grants for nonprofit organizations, which are limited to expenditures that improve an institution’s security infrastructure, such as security cameras and barriers. The state funds can also be spent on live security guards, which are in particular demand by these institutions during high profile events and holidays.

“We live in dangerous world, where Jews and other minorities are a particular target,” says Rabbi Schnall, Agudath Israel’s New Jersey Director. “On behalf of our community, I thank Assemblywoman Quijano, Senator Diegnan, and Senator Weinberg, another primary sponsor, for leading the effort to make this legislation a reality. We look forward to celebrating its implementation, which will result in enhanced security for vulnerable communities across our state.