On Wednesday, Agudath Israel of Illinois (AIOI) embarked on its annual mission to the state capital of Springfield. With 45 participants, this year’s mission led by AIOI’s director of government affairs, Rabbi Shlomo Soroka, was the largest ever. The mission’s delegates reflected a broad spectrum of community participation; young leaders and veteran activists, men and women, rabbis and lay leaders, and representatives of the various Jewish organizations and day schools. Also joining the mission were AIOI’s CEO, Rabbi Yitzchok Ehrman, Agudath Israel of America’s executive director Rabbi Labish Becker, and its national director of state relations, Rabbi A.D. Motzen.

Illinois is unique in that it hasn’t passed a budget in two years and a palpable feeling of despair and frustration often permeates the halls of the capitol building. 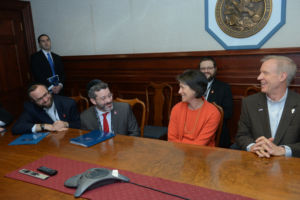 The budget impasse has virtually precluded any legislative initiative with a price tag. Nevertheless, part of the goal of the mission was to seek creative ways to procure government assistance and ensure that the communal needs will be included in an eventual “grand bargain.” The other goal was to thank elected officials for all they have done for the Jewish community and to demonstrate our support during these difficult times.

The mission began with the entire delegation participating in an intimate roundtable discussion with Republican Governor Bruce Rauner and his wife, Diana. The governor talked about his personal and familial connections to the Jewish community, his  love of Israel, and his appreciation of the Orthodox Jewish community. He then shared his plans to combat anti-Semitism through implementing and expanding a mandated Holocaust curriculum in public schools and by providing special training to law enforcement to identify and respond to hate crimes. He also spoke about expanding Illinois’ anti-BDS law to ban companies which participate in BDS (Boycott, Divestment, and Sanctions against Israel) from receiving any state contracts. The governor was eager to hear about the needs of the community. Participants described to the governor the challenges they face trying to afford Jewish day school education and transporting their children to their schools. 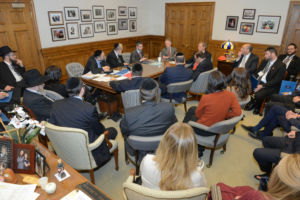 The next meeting was with the nation’s longest serving House speaker in U.S. history, Michael J. Madigan, who was joined by Senate President John Cullerton. Speaker Madigan reflected on the background and challenges of the political impasse. Also present were Representative Lou Lang (D- 16) and Senator Ira Silverstein (D-8) who, last year, jointly sponsored legislation allowing Hatzalah volunteers to use lights and sirens for emergency responses in their personal vehicles. The Democratic leaders were eager to hear about the positive impact of the bill on Hatzalah’s ability to respond to emergency calls.

The discussion then turned to the concern of rising anti-Semitism and the security of the Jewish community. Representative Lang, working closely with AIOI, recently sponsored a bill that would provide $25 million in emergency security funding. The delegates thanked him and asked the legislative leaders for their support. The bill already has 19 co-sponsors and will hopefully be brought to a full vote in the House in the near future. 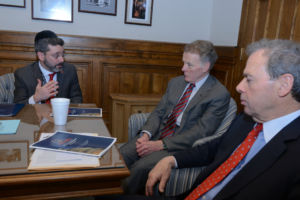 The entire group then headed to the historic Old State Capitol for an elegant lunch reception. The first speaker the assistant superintendent of Illinois State Board of Education (ISBE), Dr. Kate Anderson Foley who talked about the agency’s approach to nutrition and to students with special needs The second speaker was Homeland Security Grant Manager Bob Evans of the Illinois Emergency Management Agency. As the person responsible for reviewing grant applications, he explained how applications are evaluated and shared helpful resources. The group was also joined by Illinois Secretary of Education Beth Purvis and Catholic Conference executive director Bob Gilligan.

The delegation then returned to the capitol building to meet with House Republican Leader Jim Durkin (R-82) who expressed his appreciation of the faith-based community in general and Agudath Israel in particular. 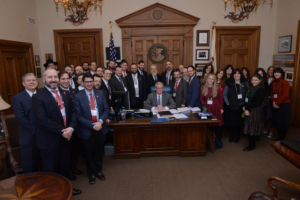 Before heading back to Chicago, the delegates split into smaller groups and visited multiple lawmakers. One of those meetings was with Representative Dan Brady who had sponsored a bill regarding the disposition of unclaimed remains that was opposed by Agudath Israel on last year’s mission. After working closely with Rabbi Soroka, Representative Brady amended the bill in such a way that it would help ensure that unclaimed Jewish decedents could be claimed by religious organizations and receive a proper Jewish burial. With new backing, the amended bill was heard that morning in committee where it passed unanimously.

It was a long, but fulfilling day for all those who participated. Many participants commented how organized, impactful, influential, and enjoyable the mission was. One veteran participant wrote, “I’m always inspired to continue working for the community when I come home from this trip,” and a new participant expressed a newfound appreciation for Agudath Israel’s advocacy efforts and requested to be notified if there were “other opportunities to get involved and try to give back to the community.” There certainly are many such opportunities and Agudath Israel welcomes individuals who wish to volunteer and get more involved.