“Our community owes an enormous debt of gratitude to the governor and legislators who made this law a reality,” says Rabbi Avi Schnall, Director of Agudath Israel of New Jersey, who lobbied extensively for the law’s passage. “They recognized the dangers our children face in today’s volatile world and made it a priority to help protect them.” 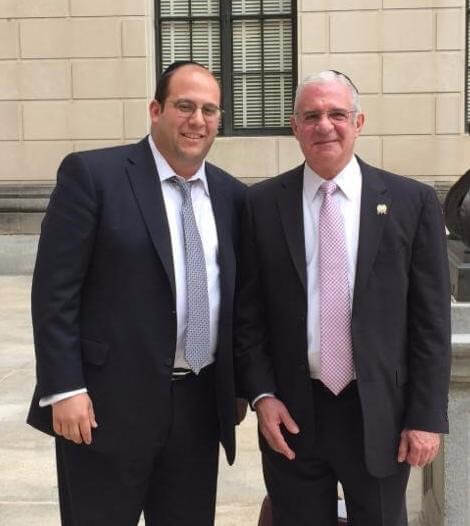 This is the first time security funding for nonpublic school students is enshrined in state law, and the funding is slated to significantly increase from current levels. Nonpublic school security funding was allocated for the first time in the state budget last year, at a rate of $25 per student. The allocation was increased to $50 per student in this year’s budget. The new law allows for $75 per student to be allocated in future budgets, which would total approximately $11 million for students in New Jersey Yeshivos, Bais Yaakovs and Hebrew day schools. Funding can be utilized for security guards, surveillance cameras, fences and other security related expenditures.

Rabbi Schnall notes the significant influence that Assemblyman Gary Schaer, who introduced the bill, had in the bill’s passage and implementation. “For the past two years Assemblyman Schaer has invested an enormous amount of energy in this legislation, introducing it into the Assembly, guiding it through the legislative process and ensuring that it becomes law, our children will be able attend schools that are now safer and more secure due to the leadership of Assemblyman Schaer”. Other legislators that played a key role include Senate President Stephen Sweeney; Assembly Speaker Vincent Prieto; and Senator James Beach. He also thanks the Orthodox Union and Catholic Conference for working tirelessly together with Agudath Israel of New Jersey to help secure the bill’s passage and implementation.

“Our community’s educational institutions can now move ahead and make their campuses a lot safer for their precious students,” says Rabbi Schnall. “May Hashem provide them with the ultimate protection.”