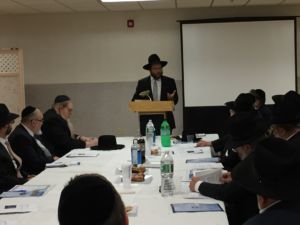 It was an educational evening with potentially life-saving ramifications for more than a dozen Rabbonim from the Passaic area who attended a conference arranged by Agudath Israel of New Jersey. The event introduced local Rabbonim to the many services provided by Chayim Aruchim, a division of Agudath Israel of America. The gathering was held at the Yeshiva Ktana of Passaic Girls’ school and followed similar gatherings for Rabbonim in Lakewood and Edison area.

“The purpose of this meeting was to inform Rabbonim of the nuances, questions and difficulties that arise in end of life situations,” explained Rabbi Shmuel Lefkowitz, vice president of Community Services for Agudath Israel of America.

“When a Rav is approached for a medical psak, he needs to have a comprehensive grasp of all the issues so that he can pasken accurately,” added Rabbi Avi Schnall, New Jersey director of Agudath Israel of America.

Opening remarks were delivered by Mr. Duvy Gross of Passaic who shared his own experiences as the owner of Regency Nursing and Rehabilitation Centers which has several New Jersey locations. Mr. Gross shared the many pressures he faces from insurance companies who encourage him to prioritize cost over life saving measures. 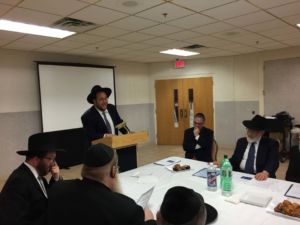 That same sentiment was echoed by Dr. Chaim Gejerman, a well known radiation oncologist affiliated with Hackensack University Medical Center, who stressed the importance of culturally sensitive medical services. Dr. Gejerman lamented the lack of emphasis on the value of life exhibited by some medical professionals, as well as the financial pressures from insurers that influence health care decisions.

Rabbi Gedaliah Weinberger, chairman emeritus of the board of Trustees of Agudath Israel of America, shared several of Chayim Aruchim’s success stories, instances where their intervention literally saved the lives of those who had been written off by the medical community. In one case, the family of a very sick individual consulted with a posek who was grappling with giving them the go ahead to discontinue life support based on the information he was provided. One family member reached out to one of Chayim Aruchim’s poskim who understood immediately that the information had been presented incorrectly. The Chayim Aruchim Rov further clarified the situation, contacted the primary posek and the correct psak was issued. Rabbi Weinberger explained that it is only because Chayim Aruchim’s Rabbonim are so well educated in the medical field that they know how to ask the relevant questions, a skill that has literally saved lives. 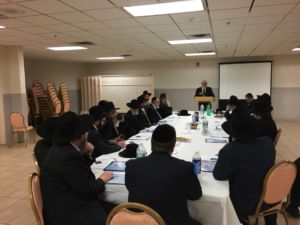 Rabbi Eliezer Gewirtzman, a member of Machon Chayim Aruchim the organization’s rabbinic advisory board, presented the halachic issues in end of life situations, advising participants of particular questions that should be asked, particularly in cases that involve feeding tubes and dementia as well as other factors that can play a crucial role when paskening shaylos of this nature.

Finally, Rabbi Schnall discussed the importance of completing a halachic medical directive, particularly in light of the recent initiative in New Jersey to legalize assisted suicide. The proposed law, which has already passed the New Jersey Assembly, would give patients who are told they have six months or less to live the right to self administer life-ending drugs and would create additional pressures to discontinue treatment of those who are deemed to be in the final days of life.

Feedback from the conference was extremely positive, noted Rabbi Schnall, with several contacting the Agudah office to thank them for hosting the event.

“Many Rabbonim are unfamiliar with the realities of end of life situations,” explained Rabbi Schnall. “The feedback we got was tremendous with several Rabbonim telling us that they have been approached with questions in the past about situations of this nature and that there were many issues here that they were simply not aware of.”