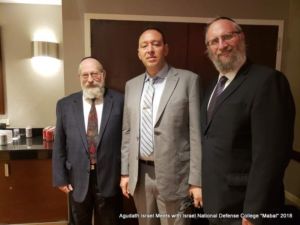 A delegation of more than 50 high ranking leaders from the Israel National Defense College on a fact finding mission in Manhattan met with representatives of Agudath Israel of America on Thursday. Known in Israel by its Hebrew acronym of MABAL, the Israel National Defense College is comprised of high ranking officials in the Israeli military, intelligence, energy and other key agencies, and includes both American and foreign officers.

The mission was launched to provide its members, many of whom ultimately take on leadership roles in the Israeli government, with greater perspective on Jewish communities in the United States by introducing them to influential people and opening up a dialogue with them on the American-Israeli relationship.

In a meeting arranged by the Israeli consulate, the MABAL members spoke with three Agudah representatives: Rabbi Avi Shafran, director of public affairs, Rabbi Yeruchim Silber, New York director of government affairs and Leah Zagelbaum, director of communications. The Agudah group had an informal discussion with the Israeli group about the current status of Orthodox Jewish life in America and the role the Agudah plays in advocating for the needs of its constituents, including its strong support of Israel. Also present at the meeting were representatives from the Orthodox Union.

During the nearly hour long meeting, Rabbi Shafran described the diversity of the Orthodox Jewish community in the United States and explained the role of Agudath Israel, which places a heavy emphasis on advocating for religious freedom. Rabbi Silber detailed the organization’s advocacy efforts in New York and other states around the country, with a particular focus on education funding and school choice. The Agudah’s advocacy on behalf of Israel’s security was addressed by Ms. Zagelbaum.

“Agudath Israel was honored by the invitation to have its representatives make presentations to, and answer questions from, so respected and accomplished a group and I think it says much about the group’s members and the mission’s organizers that they recognized the importance of better understanding the American Orthodox community,” said Rabbi Shafran. “The interaction was polite, su

bstantive and intelligent. I, and my colleagues were very impressed with the delegation, their insightful questions and their good will toward us.”