On Tuesday, Maryland’s nonpublic school community came out in droves to the State Capital of Annapolis for the annual student rally hosted by Maryland CAPE. Despite the chilly temperatures more than 1,100 students, teachers, parents, and advocates from numerous faith communities, gathered on Lawyer’s Mall facing the State House to express their appreciation for programs like the BOOST (Broadening Options and Opportunities for Students Today) Scholarship Program, and other programs that benefit nonpublic schools and their students.

With the ninety-day legislative session heading into its final few weeks, the rally was timely, as the General Assembly is deciding the budget allocations for the upcoming year.

Before heading outside, arriving students were greeted by Senate President Thomas V. “Mike” Miller, who welcomed them to Annapolis and spoke of the virtues of having both public and nonpublic school options for children in Maryland.

As the students filled the open area of Lawyer’s Mall they chanted “support all kids” while waving “thank you cards” that were later delivered to their legislators.

Governor Larry Hogan mixed with the crowd, engaging the children in small talk and taking selfies with the guests. The governor was introduced by the event’s co-chairs Rabbi Ariel Sadwin, director of Agudath Israel of Maryland and president of Maryland CAPE; and Garrett J. O’Day, Esq., associate director for education at the Maryland Catholic Conference and steering committee chair of Maryland CAPE, and lauded for his record-setting allocations to both public and nonpublic education. In his remarks, Governor Hogan encouraged the students to make sure their voices are heard by the legislators in order to ensure that the record level of funds that he allocated for the BOOST program make it all the way through the budget decision process.

The BOOST scholarship program has provided $11 million in scholarships to low income families over the last two years, with more than $2 million going to students who attend Jewish day schools.

As legislators made their way from their offices to the morning floor session in their respective State House chambers, many stopped off at Lawyer’s Mall to cheer on the students and profess their support for the aid to nonpublic school families. 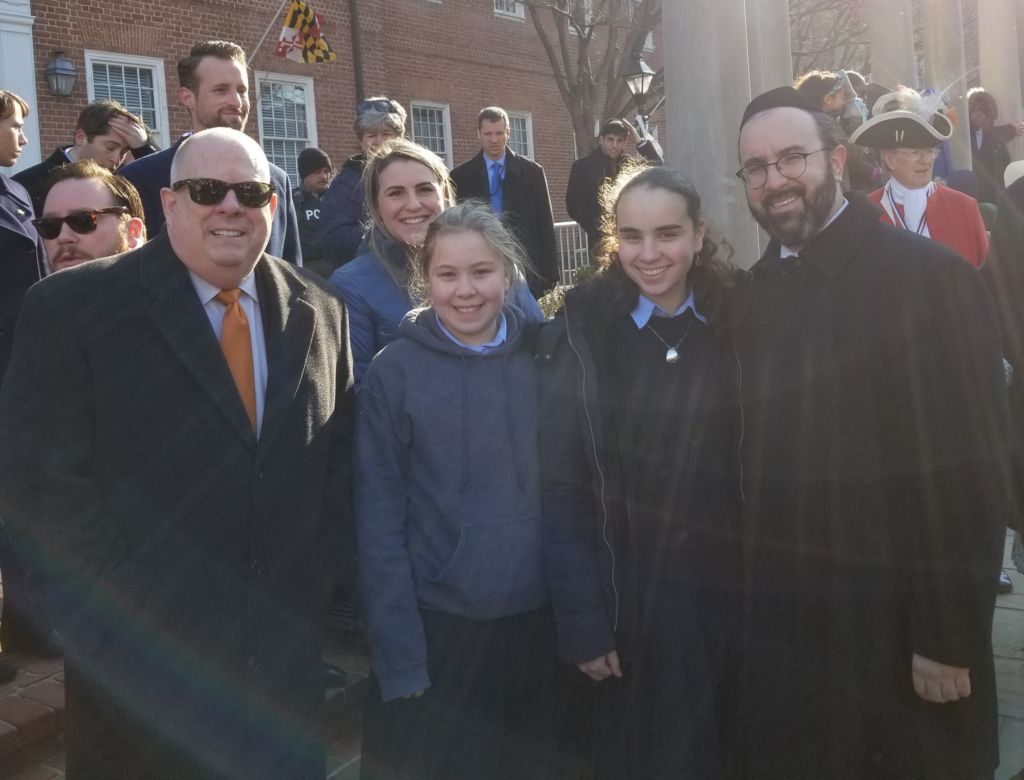 Rabbi Sadwin and Mr. O’Day then presented Maryland CAPE’s inaugural Career Appreciation Award to Senator James “Ed” DeGrange. Senator DeGrange has been the foremost legislative champion for the cause of nonpublic schools and their much needed financial support for many years. After the current session ends, Senator DeGrange intends on retiring from elected office, much to the chagrin of the members of the nonpublic school coalition.

Among the multitudes of participants was a 100 person delegation from the Jewish day schools, with large groups from both Bais Yaakov and Bnos Yisroel high schools. Rabbi Yochanan Stengel, Bnos Yisroel’s high school principal commented, “It was very meaningful for our girls to see firsthand the results of Agudath Israel’s tireless efforts to establish relationships with our elected officials. Rabbi Sadwin’s presence and rapport with the governor and delegates reinforced to our students the importance of his work on behalf of the schools in our community”. 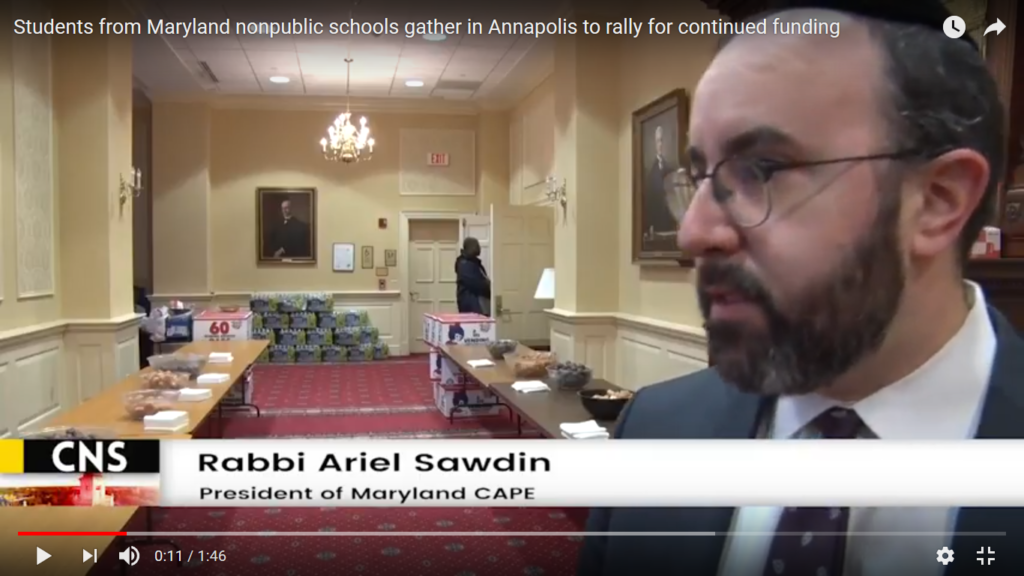