As Jewish Federations Gather in Tel Aviv, Am Echad Makes Its Voice Heard

As Jewish Federations Gather in Tel Aviv, Am Echad Makes Its Voice Heard 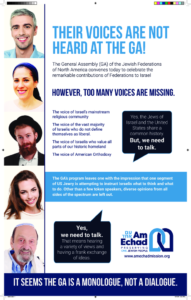 The theme the federation group chose for their gathering this year is “We need to talk” – referring to what the group asserts is a growing rift between Israel and American Jews. The fissure includes political issues but also, prominently, the idea of “Jewish religious pluralism” – the notion, advanced by the heterodox movements, that there are different “Judaisms,” all of which, and all of whose religious decisions, deserve official recognition by Israel. Currently, and since the founding of the State of Israel, the Israeli Chief Rabbinate oversees Jewish personal status issues like conversion, marriage and divorce.

Am Echad, an effort launched in the 1990s by Agudath Israel of America, consists of a broad spectrum of American Orthodox leaders across the United States and Canada, and makes the case that the opinion of the American Orthodox community – the most Jewishly engaged, most robust and most rapidly growing portion of American Jewry – deserves to be heard.

Which is not happening at the federation group’s conclave. Expression of the Orthodox position – that only a single standard for personal status issues in Israel can prevent the Jewish disunity, assimilation and multiple “Jewish peoples,” the sad reality in America – is missing from the gathering’s agenda, which is featuring more than 150 speakers.

Am Echad placed an advertisement in the Jerusalem Post and in an issue of Haaretz that was provided to the gathering’s delegates noting that the “voice of Orthodox Jewry in North America” has “disappeared from the discourse” and is not being heard at the GA.

And that voice is the one that the GA most needs to hear. Non-Orthodox American Jewry, said Am Echad Co-Chairman Shlomo Werdiger, “whose numbers and dedication to Israel are decreasing, stands in stark contrast to the fastest growing and most vibrant segment of American Jewry.”

His co-chairman, Dr. Irving Lebovics, concurs, asserting that the GA delegates and Israeli observers are “hearing only one American Jewish voice,” that of the non-Orthodox. “The message reflected from the program and the choice of lecturers is that only one opinion is worthy of being heard. The Jewish Federation needs to listen more and dictate less.”

Opinion pieces and editorials making Am Echad’s case appeared both in Israel and the U.S. And social media was also harnessed to get the group’s message out to a wider audience.

“Rabbi Moshe Sherer, z”l, the legendary leader of Agudath Israel of America, created Am Echad over 20 years ago,” says Rabbi Chaim Dovid Zwiebel, the executive vice president of Agudath Israel. “Today, no less than then, Am Echad is standing up proudly to correct the record about the misrepresented state of American Jewry and to advocate for the maintenance of the religious status quo in Israel, the only assurance of true Jewish unity in Eretz Yisroel.”