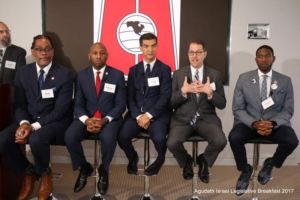 On Tuesday, November 2nd, with elections imminent, more than 150 Jewish community advocates gathered with key local city and state elected officials for Agudath Israel’s annual pre-election legislative gathering. Held at Alliance Bernstein Global Wealth Management in Midtown Manhattan, the highlight of the breakfast was a panel discussion amongst five of the New York City Councilmembers seeking to become Speaker of the Council.

The topic of the panel, “Challenges Facing the Jewish Community in New York City and the Role of Government,” led to a discussion of many vital topics, such as security issues, affordable housing for large families, lunch programs that include kosher meal options, government support for nonpublic schools, and effectively working with the mayor, even when city officials and the mayor disagree. Throughout the morning, speakers kept coming back to the idea that New York is a strong conglomeration of many communities that share common concerns and goals; that it is a diverse community with universal needs.

Councilmember Rodriguez, who hails from the Dominican Republican Republic, said that the Latino community, which makes up about 29% of the 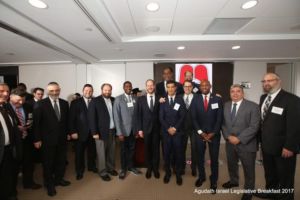 city’s population, shares the same interests as the Orthodox community. He said that we are “building bridges together.” Councilmember Williams said, “All communities want to have safe, affordable housing, safe streets, good schools, good food…”

All participants agreed that to make positive changes for all communities, they need to be open and receptive to the mayor but to stand up to him when his ideas are not in the city’s best interest. “At the end of the day,” said Councilmember Richards, “it’s about the health of New York City.”

Councilmember Cornegy strongly advocated for funding for the NYPD and anti-terrorism, cautioning about potential Federal cuts. He spoke glowingly of the Jewish community’s support after a hate crime in his district, “The Jewish community joined with me and stood against that level of hate.”

Councilmember Levine said that the council should “support non-pedagogical services like transportation and special education for nonpublic schools.”

Other prominent speakers at the event included Public Advocate Letitia James, who was introduced by Rabbi Yeruchim Silber, Agudah’s Director of NY Government Relations. She thanked Agudath Israel for its advocacy and its partnership with legislators.

Greetings were also delivered by Acting Brooklyn District Attorney, Eric Gonzalez, who spoke about the warm relationship he enjoys with the Orthodox Jewish Community.

NYC Comptroller Scott Stringer and NYS Attorney General Eric T. Schneiderman referenced the recent terror attack in Manhattan, saying that it was an attack on all of us, not just on one group. Comptroller Stringer said, “The terrorist attack that happened the other day is a reminder that we are never quite safe and we have to make sure that we protect this town but we also have to respect the diversity of this city.” Attorney General Schneiderman said, “Tuesday’s despicable terrorist attack reminds us that those who hate diversity will view New York as a target because of our success at building a pluralistic society.” 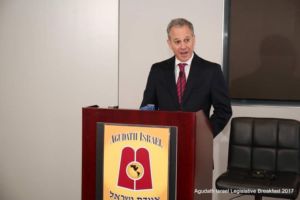 He warned of the emerging threats to the city, citing an almost 20% increase in hate crimes in major American cities this year. “These is a need for us to stand together, to work together,” he said. “Ideas that we thought were driven into the darkest corners of society are reemerging. I am proud of the role that the Jewish community has taken in protecting the rights of all.” He also mentioned the need to work on amending zoning that is used to restrict synagogues and eruvim.

The Alma Bank sponsored this year’s breakfast. The Friedlander Group and its CEO, Ezra Friedlander, coordinated the event. Breakfast Chair Joseph B. Stamm, CEO and President of NYCHSRO/MedReview, could not be present.

Rabbi Chaim Dovid Zwiebel, Agudah’s Executive Vice President, said, “The need to engage elected officials on issues of importance to our community has never been greater. Today’s breakfast was a significant achievement.”