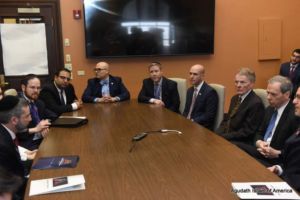 Jewish day school students in Chicago will once again have yellow buses to transport them safely to school next year, and community members can look forward to new and improved community infrastructure projects. Along with the state’s annual operating budget, the Illinois General Assembly also passed a massive capital bill to repair and upgrade the state’s infrastructure. The former contained a $1.173 million school transportation grant for Agudath Israel of Illinois (AIOI) while the latter included millions of dollars in infrastructure grants to Jewish organizations advocated for by AIOI. Despite concerns that transportation funding would be cut due budget constraints, the Illinois Legislature included the grant to AIOI for school transportation in the state’s annual budget it passed over the weekend. The grant is used for a school transportation program administered by AIOI that subsidizes the cost of busing for families who send their children to Jewish day schools in the Greater Chicagoland area. More than 2,000 children attending eight schools rely on the grant which makes the service affordable. While this grant has been awarded in prior years, it’s something that Agudath Israel must fight for annually and cannot be taken for granted. This line item was a legislative priority during Agudah’s annual mission to Springfield and a major focus of the organization’s advocacy efforts during the last month of the legislative session. Agudath Israel applauds the efforts of State Representative Yehiel Kalish (D- Chicago), Senator Ram Villivalam (D- Chicago) for their work with legislative leaders, most notably, House Speaker Michael J. Madigan (D-Chicago), along with Senate President John Cullerton (D-Chicago). “This is really an issue of public safety” said Rabbi Shlomo Soroka, Director of Government Affairs for Agudath Israel of Illinois. “All children should be able to travel to school in a safe and secure manner.” In the capital bill aimed at repairing the state’s transportation infrastructure and renovating state facilities, a limited amount of funding was allocated towards community economic development projects. Many municipalities, nonprofits, and advocacy groups requested funding for their various needs. Agudath Israel of Illinois worked closely with lawmakers to ensure that community priorities were included in the bill. The final package included over $2 million in capital grants to multiple Orthodox Jewish organizations. Agudath Israel of Illinois thanks Rep. Kalish, Sen. Villivalam, Speaker Madigan and President Cullerton for including these requests in the final appropriations package. Rep. Kalish expended much time and energy working with Agudah to ensure that these organizations were included in bill and awarded significant sums towards vital projects. Sen. Ram Villivalam was also instrumental in securing generous grants for several Orthodox Jewish organizations in the community.
Sara Rosenbaum2019-06-05T10:45:50-05:00June 5th, 2019|