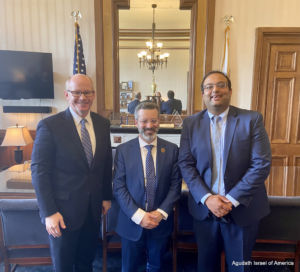 After months of intense advocacy organized by Agudath Israel of Illinois and its allies, private school parents in Illinois are breathing a sigh of relief as legislators held the line to preserve a $100 million tax credit program on the final day of the legislative session. The effort included thousands of emails and handwritten letters, dozens of meetings and multiple visits to the state capital, once again proving the effectiveness of grassroots advocacy.

Launched in 2018, the Invest in Kids program has awarded more than 22,000 scholarships and raised more than $170 million over the past three years, providing individuals and businesses with the ability to reduce or eliminate their state tax liability by offering a 75 percent credit on their Illinois taxes in return for a donation to a recognized scholarship organization. Those donations are then used to fund tuition scholarships awarded to low-and-middle income students at eligible schools statewide.

More than 1,300 students in Illinois Jewish schools are currently receiving scholarships with an average value of $12,000, and another 1,000 students are already approved for the upcoming school year.

The five-year program garnered bipartisan support, but pandemic-related shortfalls had the tax credit slashed nearly in half, to 40 percent, by Governor J.B. Pritzker in his proposed 2022 budget. Hoping to ensure Invest in Kids’ continuity, representatives of yeshivas, nonpublic schools, scholarship granting organizations, communal groups, parents and even schoolchildren spent months reaching out to their elected officials. Rabbi Shlomo Soroka, director of government affairs for Agudath Israel of Illinois, noted that the Agudah was heavily involved in the grassroots advocacy effort.

“We brought families down to the Capitol, which wasn’t easy during COVID, and had them standing outside, catching lawmakers on their way into the building to ask them to save the program,” said Rabbi Soroka.

The good news came on May 31st, not only preserving the value of the tax credit at 75 percent, but also extending the program for an additional year, keeping it in place through 2024. Rabbi Soroka credited the Senate and House leaders and many members of the Illinois General Assembly, including legislators representing Illinois’ Jewish communities, for their unfailing support.

“We are grateful to the many lawmakers who stood up for our children, providing educational opportunity to those who need it most,” said Rabbi Soroka. “People can breathe now, knowing that the State of Illinois truly believes in investing in our kids.” 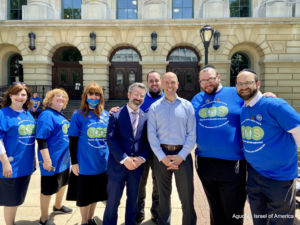 The first: State Representative Bob Morgan (D-Deerfield) meets with Rabbi Shlomo Soroka, director of government affairs for Agudath Israel of Illinois and parents in front of the Capitol in Springfield, Illinois. 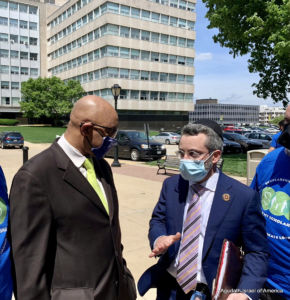