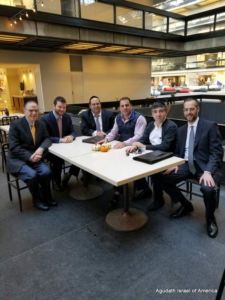 New Jersey yeshiva parents will be able to breathe a little easier as a bill that will significantly increase security funding for nonpublic schools has passed the Legislature and makes its way to the governor’s desk for his final approval.

Bill S3080/A4597 was introduced in the Assembly by Assemblymembers Gary Schaer, Lisa Swain and Christopher Tully, and in the Senate by Senators Joseph Lagana, Vin Gopal and Paul Sarlo. The funding may be used for security services, technology or equipment in order to “ensure a safe and secure school environment for nonpublic school students.”

“With the horrific Pittsburgh shooting still fresh in our minds, the need to protect our children while they are in school is more apparent than ever,” said Mr. Zucker.

Those thoughts were echoed by Duvy Gross, co-chairman of Agudah’s New Jersey office, who noted that it is only in recent years that the state has recognized the need to ensure the safety of all Garden State students, no matter what school they attend.

“Over the past four years we have seen security funding allocations for our children finally taking their rightful place in the state budget,” said Mr. Gross. “We are fortunate to have hardworking and dedicated public servants like Assemblyman Gary Schaer standing up for school safety at this time of unprecedented need.”

Having successfully cleared the Legislature, the bill which will be effective immediately, awaits one final action: the signature of Governor Phil Murphy. Rabbi Avi Schnall, director of the Agudah’s New Jersey office called on the governor to act on the bill without any delay.

“Our schools need this, and more importantly, our children need this,” said Rabbi Schnall. “We ask every New Jersey resident to contact Governor Murphy and to urge him to sign this bill into law so that nonpublic school children can focus on broadening their educational horizons without having to fear for their safety.”