Bright News from the Sunshine State

Bright News from the Sunshine State 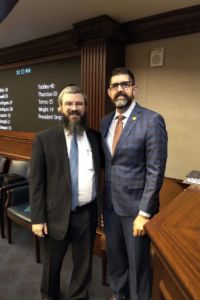 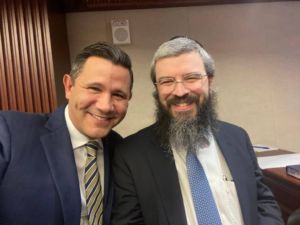 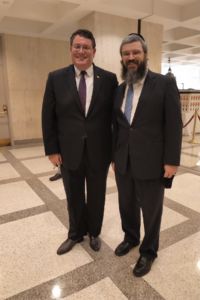 It was during the 7-hour drive to Tallahassee, to deliver the opening prayer at the Florida Senate, that Rabbi Moshe Matz, executive director of Agudath Israel of Florida, received the news that SB1084, a bill that would enable Hatzalah of South Florida to transport patients in their own ambulances, was passed by the Florida Senate unanimously. In his remarks, State Senator Jason Pizzo, a key leader in getting the bill passed, noted that the bill was supposed to be passed the next day, in Rabbi Matz’s presence, but that “we’ll take it today!”

With this great victory for the Jewish community of South Florida behind him, Rabbi Matz was honored, the next morning, to deliver the Senate invocation, saying that “the greater struggle of our time is to see our country and its people fearful, distrustful, and divided. It behooves us now more than ever, to turn our eyes and heart to G-d for direction and protection.”

Other good news is also coming out of the Florida Legislature, in the form of both the House and Senate passing CS/HB 7045, a major school choice bill. The bill aims to consolidate Florida’s scholarship programs for special needs students and expand the state’s means-tested scholarship program to middle income families. Once signed by the governor, this bill will transform the lives of thousands of Florida students.

And finally, Rabbi Matz just joined Doug Tuthill, president of one of Agudah’s partners in Florida’s school choice coalition Step Up for Students, on the redefinED podcast. Rabbi Matz discussed a wide range of topics including the history of the Agudah, his own family’s story as Holocaust survivors and Cuban refugees, the importance of education to the Jewish community, and the school choice bill that just passed the Florida House. The podcast episode is available here.

“So much has changed since I stood at the podium in the Florida Senate a year ago at the start of the COVID-19 pandemic, but the work of the Florida government continues to be positive,” said Rabbi Moshe Matz. “The passing of SB1084 is great news for the Jewish community, and will hopefully save many lives once it is signed by Governor DeSantis; by passing CS/HB 7045, the Legislature showed that Florida continues to lead the nation in putting families and children first.”