Building Bridges Between the Orthodox Jewish Community and Ontario’s Coroners

Orthodox Jews have a religious mandate to oppose unnecessary autopsies. Coroners have a mandate to investigate suspicious deaths and protect the public health. Sometimes those two mandates appear to conflict. Thankfully, in Ontario, the Office of the Chief Coroner has worked closely with Gesher Canada and Agudath Israel of America to increase the level of cooperation and communication with the Jewish community and create a culturally safe environment for all citizens of faith.

On Wednesday, February 21st, senior staff from the Office of the Chief Coroner for Ontario and all of the RegionalSupervising Coroners met with representatives of the Orthodox Jewish community. Significantly, this event took place on the eve of Zayin Adar, the date on the Jewish calendar dedicated to the chevra kadisha (burial society). This was the latest in a series of meetings arranged by Gesher Canada, an organization dedicated to building bridges between the Orthodox community and governmental bodies.

An initial meeting between Gesher board members Menachem Kuhl and Dovid Stein, Agudath Israel of America’s National Director of State Relations Rabbi A. D. Motzen, and Chief Coroner for Ontario Dr. Dirk Huyer, took place in November. Discussions highlighted the need for a closer working relationship. While Gesher and local rabbis have had many positive experiences dealing with local coroners, the community lacked a designated point person to call upon in such situations, coroners weren’t always familiar with the particular needs of the Jewish community, and community members didn’t always understand the needs of the coroner’s office.

A follow up meeting in January introduced Dr. Huyer and Deputy Chief Coroner Dr. Reuven Jhirad to more than a dozen Toronto rabbis and community leaders. 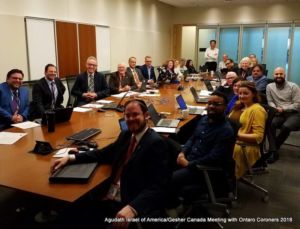 “I was very moved and encouraged by Dr. Huyer’s sincere interest in understanding the religious needs of our community, and ensuring that his office meets those needs to the maximum extent possible,” said Rabbi Yacov Felder of Shomrai Shabbos Chevrah Mishnayos Congregation and the COR Kashruth Council of Canada. “It was comforting to know that in the event, G-d forbid, of a tragic death of a community member, rabbis and family members can now call upon Gesher to facilitate communications with the coroner’s office.”

The most recent meeting included a presentation by Agudath Israel of America’s Rabbi A. D. Motzen followed by a lively discussion about ways to increase the level of cooperation and communication between the groups.

“Unlike many American states, Ontario law doesn’t outline when religious rights outweigh the need for an autopsy. Dr. Huyer’s office developed a comprehensive accommodation policy which encourages a coroner to accommodate religious beliefs, but with hundreds of staff across the province, the Chief Coroner felt that it was critical that the supervising coroners hear directly from us about the what and why of Jewish beliefs and practices surrounding death and burial,” said Rabbi Motzen. “The most recent meeting also allowed for a frank and practical discussion of the coroners’ need to conduct a death investigation and how to balance their legal obligations with the religious rights of the decedent.”

The meetings have brought about an immediate benefit to the Jewish community. “Since our initial meeting, Gesher has been involved in several cases involving the coroner’s office,” said Dovid Stein, “and thanks to Dr. Huyer and these meetings, we have worked with the coroners to ensure that the religious needs of the families were taken into consideration to the maximum extent possible.”