Agudath Israel of Illinois’ director of government affairs, Rabbi Shlomo Soroka introduced Representative Lang and thanked him for his decades-long service to the State of Illinois in general and the Orthodox community in particular, most of which resides in his district. Rabbi Soroka thanked the Deputy Majority Leader for always being an accessible, responsive, and reliable advocate for the Orthodox community. Over the years, Mr. Lang has sponsored and helped pass numerous bills at the request of Agudath Israel and its constituents. 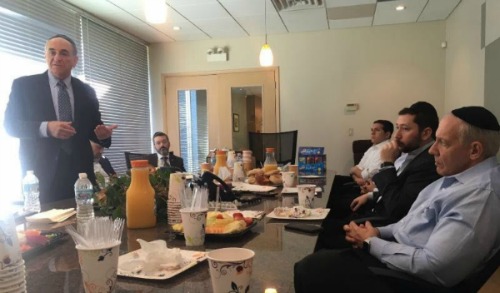 Mr. Lang shared an insider’s perspective of the current political gridlock in Illinois. He spoke about the quagmire that has prevented the passage of a full budget for over a year, negatively impacting nearly all Illinois citizens and acknowledged the sense of frustration shared by all Illinoisans. Rep. Lang also addressed issues of particular interest to the Jewish community, including the suspension of Agudath Israel’s busing grant, which he initially facilitated a decade ago. Rep. Lang also spoke favorably about a potential scholarship program for nonpublic school students, leaving the attendees very encouraged.

In a closing message in advance of the upcoming election, Representative Lang explained the critical importance of participating in the electoral process regardless of one’s political leanings. His message was echoed by Rabbi Soroka, who is overseeing Agudath Israel’s nonpartisan voter registration and mobilization. “Who you vote for, makes a difference. That fact you voted, makes all the difference.”

Feedback following the event indicated that it served to further buttress Representative Lang’s close relationship with the growing Orthodox community of Chicago.