On Thursday morning, U.S. Senator Mark Kirk (R-IL) was hosted by Agudath Israel of Illinois (AIOI) at Congregation Agudas Yisroel of West Rogers Park in Chicago. Senator Kirk has been one of Israel’s staunchest supporters. Wishing to express their gratitude for his service, a full capacity crowd came to meet the senator. Many of Chicago’s preeminent rabbis took the time to attend this meeting, while Chicago’s Jewish lay leadership along with a broad cross-section of its Orthodox community filled the rest of the room.

AIOI’s director of government affairs, Rabbi Shlomo Soroka, opened the event by explaining how Jews pray in their synagogues each week that G-d inspire the hearts of government officials and their advisors. Jewish communities throughout the generations often prayed for simply a reprieve from unbearable persecution. It is a true blessing to live in the United States where leaders like Senator Kirk advocate and assist the Jewish community and it is something that the Jewish community doesn’t take for granted.

The senator then began by relating fascinating anecdotes regarding his personal relationships with various Israeli leaders and his efforts to assist in a broad range of areas. Among other things, Senator Kirk, who served as an intelligence officer in the Navy, played a crucial role in ensuring Israel has access to critical military intelligence and funding for missile defense, co-authored the legislation that imposed tough sanctions against Iran, and has vociferously fought the anti-Israel Boycott, Divestment, and Sanctions (BDS) movement both in Chicago and nationwide. 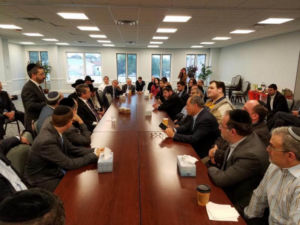 Senator Kirk’s presentation and responses to questions from the attendees were detailed, enlightening, and witty. In a passionate response to a participant who asked what motivated him to fight for Israel and the Jewish people, Senator Kirk explained that he views it as a primary moral obligation. He described himself as a student of history who appreciates the uniqueness of the Jewish people and the persecution they have endured for generations. “We must learn lessons from the 1930’s: take the threats of Israel’s enemies seriously and understand that appeasement only emboldens them. We must do whatever we can to right the wrong done to the Jewish people. It is the moral test of our generation to stand up and do what we can to protect this special nation.”

Mr. Avi Goldfeder, AIOA executive committee member, delivered closing remarks and thanked Senator Kirk for all he has done. An invitation was sent to Congresswoman Tammy Duckworth to host a similar event for her in the upcoming weeks.