Continuing the Momentum of the Siyum HaShas, Hundreds Returning to the Beis Hamedrash, Agudah’s Yarchei Kallah Set to Begin in Yerushalayim

Continuing the Momentum of the Siyum HaShas, Hundreds Returning to the Beis Hamedrash, Agudah’s Yarchei Kallah Set to Begin in Yerushalayim

Having soared to immeasurable heights at the Siyum HaShas, the Torah community is just days away from a golden opportunity to take to the skies yet again, as the Agudath Israel of America’s annual Yarchei Kallah is set to unfold in Yerushalayim.

Run by the Agudah’s Torah Projects Commission, this year’s Yarchei Kallah will take place February 16th to February 20th and will delve into the intricacies of inyanei tefilah, building on concepts recently covered in Daf Yomi. Other areas to be addressed throughout the four day Yarchei Kallah include zmanei tefilah, tashlumim, kavanah, brachos and kriyas Shema, as well as the evolution of different nuschaos and appreciating davening as an integral part of our avodas Hashem.

As in recent years, the program will begin on Sunday night with a Pesichas Yarchei Kallah event at the Lederman shul on Rechov Rashbam in Bnei Brak, where participants will have the zechus of being in the presence of HaRav Chaim Kanievsky and hearing from HaRav Yitzchak Zilberstein. After enjoying a welcome dinner in Bnei Brak hosted by the city of Bnei Brak led by its Mayor, Rav Avraham Rubinstein, participants from all over the world will be bused to their home base for the next four days, the Ramada Jerusalem Hotel. Both the Yiddish and English tracks of the Yarchei Kallah will include multiple shiurim, presentations and night programming featuring many of the Gedolei Torah in Eretz Yisrael, including senior Roshei Yeshiva and poskim. A separate women’s program will have participants visiting mekomos hekedoshim and other significant locations as well as multiple shiurim given by prominent speakers.

This year marks the 20th anniversary of Agudath Israel of America’s Yerushalayim Yarchei Kallah program,which has evolved over the years from its humble beginnings as a show of support for those living in Eretz Yisroel during the first intifada. In addition to growing in size with every passing year, the demographics have changed as well, with the program attracting English speakers, a younger audience and even multi-generational groups, with fathers, sons and even grandsons flocking to the Ramada to share the experience of immersing themselves in the sugya d’kallah.

Several hundred people have already signed up for the Yarchei Kallah and registration is continuing at www.aiayk.org. Hachanah shiurim will be taking place nightly in Brooklyn, Lakewood and Passaic and can be joined via teleconference, with previously given preparatory shiurim available for download on the Yarchei Kallah website. Rabbi Eliyahu Simcha Bamberger, national director of the Agudah’s Daf Yomi Commission, commented that coming on the heels of the Siyum HaShas, excitement is running high for this year’s program.

“With tens of thousands of people starting to learn Daf Yomi, we are seeing an unprecedented thirst for Torah,” said Rabbi Bamberger. “We are confident that those who invest just a few days in the Yarchei Kallah will see a lifetime of dividends as they enjoy an unparalleled opportunity for chizuk and limud haTorah at Agudah’s Yerushalayim Yarchei Kallah.” 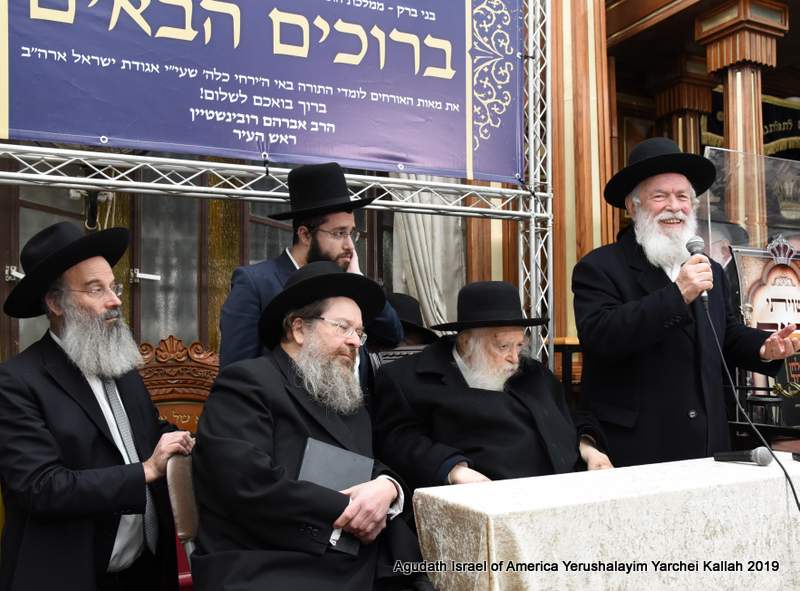 At the Yerushalayim Yarchai Kallah 2019: The dais at the Lederman Shul, Rabbi Avrohom Rubinstein at left