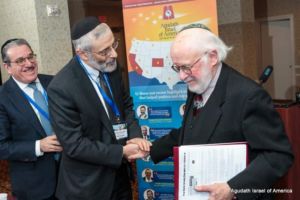 The United States Court of Appeals for the Seventh Circuit has ruled that the parsonage allowance, an allowance provided for housing expenses to members of the clergy that is exempt from federal income taxes, is constitutional, overturning the lower district court decision that had ruled to the contrary.

Agudath Israel of America had joined with a number of other national Orthodox Jewish organizations in an amicus curiae (friend of the court) brief urging the US Court of Appeals for the Seventh Circuit to uphold the constitutionality of the parsonage allowance.

The brief, written by noted constitutional attorney Nathan Lewin on behalf of the National Jewish Commission on Law and Public Affairs (COLPA), asked the court to reverse the ruling by the Wisconsin federal district court that the parsonage allowance violates the constitutional prohibition against establishment of religion.

The parsonage allowance provides a benefit to rabbis and religious teachers, among others, who can exclude this allowance from their gross income when calculating their federal income tax. The Internal Revenue Code provides for similar tax exemptions for housing allowances provided by employers where the housing is “for the convenience of the employer”, and it is the same tax principle that allows businesses and the military to reimburse its members for travel and overseas housing costs, and provides tax-free housing to teachers and police who live in the communities they serve. The brief argued that members of the clergy should not be treated differently, and this was one of the key points made by the Court of Appeals in its ruling.

Agudath Israel of America hailed the decision. Rabbi Chaim Dovid Zwiebel, executive vice president of the organization pointed out “one of the plaintiffs in the case calls itself ‘Freedom From Religion,’ and that is what they hoped to achieve. Happily, the Court of Appeals was a different mind.”