Cries of Mazel Tov! Ring Out as Mexico City Celebrates its Siyum HaShas

Cries of Mazel Tov! Ring Out as Mexico City Celebrates its Siyum HaShas

Only days before The Siyum at MetLife Stadium and Barclays Center this January 1st, the words of the final Hadran filled the air with an incredible combination of kedushah and simchah as the Mexico City community celebrated the culmination of its 13th Daf Yomi cycle. This is a city where Spanish, English, and Hebrew all echo in the beis medrash and where bar mitzvahs and weddings are held late in the evening, so that the nightly commitment to Torah learning – k’vias itim – can continue without interruption.

Close to 1,000 people gathered at the Hotel Camino Real to honor the 125 local mesaymim, who ranged in age between 25 and 95 and represented every segment of the local Jewish community. Mexico City, which has had its own kollelim since the late 1970s, has a vibrant community of lomdei hadaf, many of whom have never attended yeshiva but still consider k’vias itim l’Torah to be a top priority in their lives.

The evening’s guest speaker, Rabbi David Ozeri, Rav, Congregation Yad Yosef, who flew in for the celebration, spoke passionately about the power of consistent learning and the effects that a commitment to daily limud Torah have on every Jew. Rabbi Ozeri related numerous stories of individuals who saw tremendous positive changes and significant yeshuos in their lives, following a commitment to daily learning. The benefits of the daily Torah study were experienced by their entire families, elevating the atmosphere in their homes. Those thought were echoed by Siyum sponsor Moishi Markovitch, who shared that on the day that he went to sign the contract with the hotel for the siyum, he was saved from a sure calamity. Mr. Markovitch, one of several Mexico City residents to have completed Shas multiple times, said that he has no doubt that his salvation came about because of his commitment to perpetuating daily learning through the Daf Yomi program in Mexico City.

Rabbi Ozeri’s message – commitment to daily Torah study – echoes the theme of the 13th Global Siyum HaShas of Daf Yomi, that ki heim chayeinu, that Torah is our life, can only be made real when we learn Torah each day. The Siyum will be celebrated in countless communities around the world this January 1st, together with thousands of people in MetLife Stadium and Barclays Center. The global nature of The Siyum will be most apparent in the livestreams – translated into five languages – coming to many of those communities, as well as in the Siyum’s programs – Chavrei HaSiyum and Masmidei HaSiyum – which many of these communities have wholeheartedly adopted.

Rabbi Eliyahu Simcha Bamberger, national director of the Agudah’s Daf Yomi Commission, represented Agudas Yisroel in Mexico City. Rabbi Bamberger shared the story of a well-known Rosh Yeshiva who had been consulted about launching a new initiative to further inspire people in their Torah study. Reflecting on his own memories of the Knessia Gedolah in 1923, the Rosh Yeshiva said that he remembered the smile that broke out on the Chofetz Chaim’s face when Rav Meir Shapiro presented the concept of a Daf Yomi program that would unite all segments of Klal Yisroel throughout the world. The Chofetz Chaim’s smile, explained the Rosh Yeshiva, was akin to divrei kabalah, making it very clear that Daf Yomi was the pathway to kvius itim le’Torah in our time!

But the Mexico City siyum is only the first in a series of local Siyumei HaShas arranged around the world with the help of Agudah’s Daf Yomi Commission, giving out of town communities the ability to recognize the accomplishments of the many individuals whose hasmadah has seen them through all 2,711 pages of Shas. Large siyumim are also taking place in Atlanta, Chicago, Denver, London, Los Angeles, Montreal, South Florida, Toronto and several other locations, all in conjunction with the Daf Yomi Commission of Agudath Israel.

“While we are all looking ahead to a joyous celebration at MetLife Stadium on January 1st, it is truly an honor to assist the many distant kehillos who are marking their monumental accomplishments in learning in their own communities,” said Rabbi Labish Becker, executive director of Agudas Yisroel. “As we complete the 13th Daf Yomi cycle, we can truly see Rav Meir Shapiro’s vision coming to life, with the limud Daf HaYomi bringing true unity to Klal Yisroel in all corners of the earth, as we join together with one heart, to share the incredible simchah of the 13th Global Siyum HaShas of Daf Yomi.” 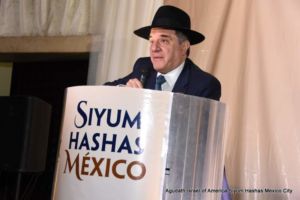 Mr. Moishy Markovitch recites the hadran at the Siyum HaShas in Mexico City 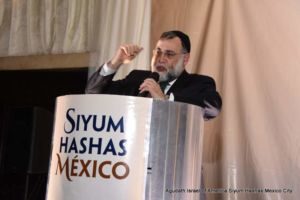 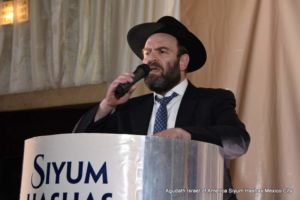 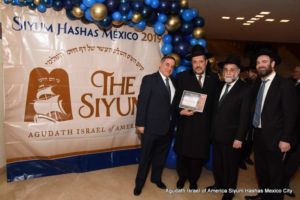