On Tuesday, New Jersey Governor Chris Christie signed Senate Bill 2049 which will provide safety (or “courtesy”) busing for 10,000 public and private school students who live in the Lakewood School District.

According to state law, busing is only mandated for those living beyond a prescribed distance, typically two miles from school. Districts may also provide busing to other students based on local conditions. For the past 30 years, Lakewood School District provided “courtesy” busing to children who live more than 6/10ths of a mile from school or who would have had to cross a major roadway. 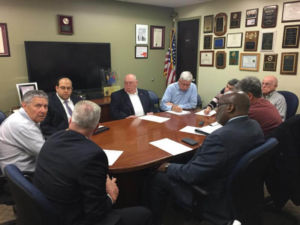 In recent years, the number of students in Lakewood School District grew dramatically while State Aid, the primary funding vehicle for the district, remained static. This year, savings from past cost-cutting measures were not enough to offset the growing deficit, leading the district to eliminate all non-mandated services and terminating courtesy busing.

Faced with the prospect of 10,000 public and nonpublic school children walking to and from school, often on busy roads, in poor lighting or inclement weather, a group of community leaders drew up a plan. Lakewood Mayor Menashe Miller and Committeeman Meir Lichtenstein worked with Senator Singer and Assemblymen Kean and Rible to develop a funding mechanism that would allow the state to provide busing outside of the frozen State Aid formulas. Compared to the “bailout” of other NJ school districts, the cost would be small.

The bill establishes a three-year nonpublic school pupil transportation pilot program in the Lakewood School District. The program will fund a consortium of nonpublic schools, which will also assume responsibility for the district’s mandated nonpublic school busing. Lakewood Township will then fund safety busing for the public school children.

“We are so grateful for the understanding, shown by the members of the Senate and Assembly, of how badly Lakewood has been shortchanged by the existing State Aid formula,” said the advocacy group, in a statement to the press lauding the bipartisan, bicameral effort. “We would like to particularly acknowledge and thank Governor Christie, Senate President Steve Sweeney, Assembly Speaker Vincent Prieto, and Assemblyman Gary Schaer, for their support of this bill and for their efforts to ensure the safety of our children.”

Rabbi Schnall, who worked tirelessly for months to help make this happen, added, “Senator Singer, Assemblyman Rible, and Assemblyman Kean are truly the heroes here, for recognizing the tremendous threat to the well-being of our community’s children and undertaking not to give up until they had achieved a successful solution.”

In his signing statement, Governor Christie commended the bill’s sponsors “for ensuring the safe transportation of our young students. No matter what school they attend, public or nonpublic, all children in New Jersey should be able to travel safely between their home and school.”