Discussing Religious Accommodations with Your Employer 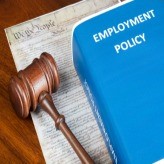 As we begin to count down the final days of summer, our thoughts naturally turn to the Yomim Tovim, a joyous season that can sometimes be tinged with stress as those in the workplace find themselves having to ask their employers for multiple days off in a very short period of time.  While in some cases employers or schools are more than accommodating of the religious needs of their workers or students, in other instances people find themselves facing both hostility and extremely serious consequences.

Agudath Israel of American’s Constituent Services Department receives numerous calls each year regarding these issues and advises callers of their religious rights which can vary by state in addition to putting them in touch with attorneys in their area who can help them safeguard their religious rights.

In one instance, it was Reuven who called the Agudah office from Phoenix, Arizona with a serious dilemma. He had been an employee of the same major shipping company for years, but due to a change in management he was told that he would now be required to work on the Yomim Tovim.  His new superiors had no interest in hearing about Reuven’s religious needs and gave him an ultimatum: come into work every day or lose your job.

We referred Reuven to a local lawyer who made the employer aware that, legally, they were required to allow their employees to use vacation days to accommodate their religious needs. Instead of spending his Yomim Tovim worrying about whether or not he still had a job, Reuven was able to spend time in shul and with his family, knowing that his job and his religious rights were legally protected.

In another case a rabbi on Staten Island called us with the story of a student, a new baal teshuva, who was enrolled in a college course that met on Rosh Hashana.  The student was told if he did not show up to class every day he would have to repeat the course. Not knowing how to proceed, the student was planning on walking two hours each way to and from school in order attend class.  We advised the student of his rights under state law and helped him draft letters to both his professor and the department head explaining that he was legally entitled to take time off for his religious holiday.  In the end, he was able to be in shul on Rosh Hashana without any fear of repercussions.

Attorney Eric Stern noted that this year in particular, when all of the Yomim Tovim fall out on weekdays, will be particularly problematic for some people.  While some may be lucky enough to have employers who will give them the time off as needed, others may be required to use vacation time or to make up any missed hours, options that are well within an employer’s legal rights.

There are no hard and fast rules when it comes to taking time off for religious holidays and Stern said that it is important not to generalize because every case is different.  Nevertheless, there are some guidelines that should be used when approaching an employer for time off for the Yomim Tovim.

“Requests for accommodation should be made in advance, in writing and in a cordial and respectful manner,” advised Stern.

The best course of action, according to Stern?

Call the Agudah office to find out the best way to proceed in your situation.

Need help making arrangements with your employer or school for the Yomim Tovim? Call our Constituent Services Office at 212-797-9000 x335 or download our eight page guide titled Religious Accommodations in the Workplace.