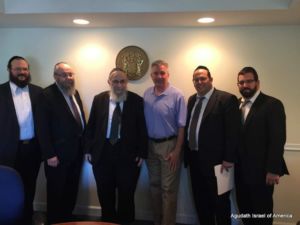 Rabbi Avi Schnall, director of Agudath Israel of New Jersey, was among several individuals who testified today at a New Jersey Assembly Education Committee hearing that addressed inequities in school funding formulas that have left many districts in the state facing staggering deficits.

The Lakewood School District is a perfect example of this problem, noted Rabbi Schnall.  The district receives funding based on the 6,000 students who attend its public schools, yet it still has to provide mandated services to an additional 30,000 private school students.  Because of this inequity, the Lakewood School District suffered a $12 million deficit last year and is expected to face a $10 million deficit this year.

“Nonpublic school children are New Jersey’s “invisible children.” They certainly exist, and their parents pay taxes,” observed Rabbi Schnall, “but these children suddenly disappear when it comes to calculating the funding formula.”

The simplest answer, explained Rabbi Schnall, is to fix the formula so that it takes into account the 150,000 private school children who call New Jersey home.

Rabbi Schnall acknowledged both Assembly Speaker Vincent Prieto and Senate President Steve Sweeney for their efforts on behalf of the Garden State’s many non-public school students.

All students in New Jersey should count, no matter what school they attend,” said Rabbi Schnall, “and all students should be counted and included in the state’s funding formula.”