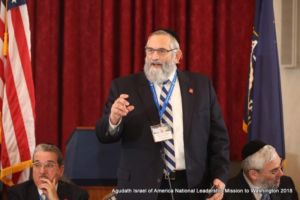 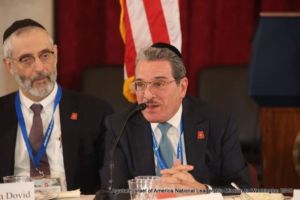 The Am Echad Mission chairmen at Agudah’s recent National Leadership Mission to Washington. On the left: Agudah’s Chairman of the Board Shlomo Werdiger, speaking. Sitting next to him is Rabbi Chaim Dovid Zwiebel, Agudah’s Executive Vice President. On the right: Dr. Irving Lebovics, President, Agudath Israel of California.

Aiming to dispel the myth that American Jewry is represented by the Reform and Conservative movements, a broad group of rabbinic and lay American Jewish leaders is heading overseas to meet with high-level Israeli officials and speak on behalf of the American Orthodox community.

The Am Echad mission, which was coordinated by Agudath Israel of America, hopes to effectively counter the false narrative that non-Orthodox groups are the true voice of American Jewry.

“While we have only love and concern for all Jews, and pass no judgement on anyone regarding their religious observance, the claims made by heterodox Jewish groups and federations are simply untrue,” said Dr. Irving Lebovics, Chairman of Agudath Israel of California and is co-chairing the mission. “These groups, whose numbers and dedication to Israel decrease every year, do not represent the Orthodox community, the fastest growing and most vibrant segment of American Jewry.”

The Am Echad delegation will be meeting with Prime Minister Binyamin Netanyahu, President Reuven Rivlin, Jerusalem Mayor Nir Barkat, Knesset members and Israeli media to present evidence that the American Orthodox community is not only the segment of American Jewry most supportive of Israel but rapidly becoming the face of American Jewry as a whole.

“Many of us have children who live in Israel, and the number of Orthodox Jews making aliyah from America continues to rise,” said Shlomo Werdiger, Chairman of the Board of Trustees of Agudath Israel of America, and the other chairman of the mission.

“We send our children to study in Israeli schools,” he continues, “often for many years. We support Israeli institutions, provide millions of dollars to the Israeli economy in charitable contributions, travel frequently to Israel, buy Israeli products, invest in Israeli properties and are strongly devoted to the security of the State of Israel.”

The two-day mission will take place in Jerusalem on February 26th and 27th.‎