Does It Really Matter If I Vote?

Does It Really Matter If I Vote? 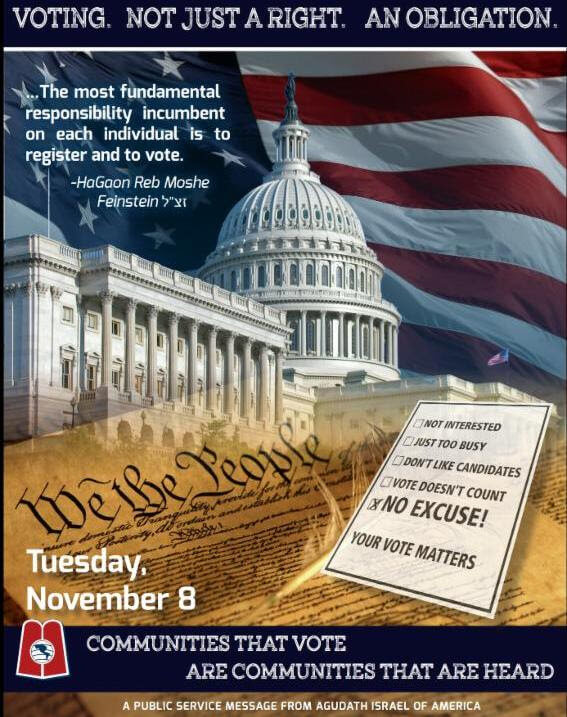 An interview with Rabbi A. D. Motzen by Sandy Eller

Rabbi A.D. Motzen, national director of state relations for Agudath Israel of America, addressed the sense of malaise that has enveloped this year’s general election, taking place next week.

Sandy Eller: Does Agudath Israel have any official stance on the presidential election?

A.D. Motzen: It is one of the first questions we get about the election. Who are the rabbis endorsing? What is the Agudah saying? The answer is always the same. Agudath Israel of America is recognized by the IRS as a 501(c)(3) religious non-profit and we are therefore forbidden by law to endorse or oppose any candidate. We never have and we never will.

SE: Yet the Agudah is extremely active in the political arena…

ADM: What we are involved in when it comes to the elections is a non-partisan “get out the vote” effort. We have seen that communities that vote are communities that are listened to and heard. The first time I testified in the Ohio statehouse I was asked “how many members do you have?” Politicians want to know how many people we represent and how many votes we can influence. It is very important for elected officials to see that the Jewish community comes out and votes, not just on November 8th, but at every election.

SE: Yet so many people are apathetic about voting, especially this year. What if someone feels that they can’t responsibly cast their vote for either of the two major presidential candidates?

ADM: Ideally, everyone should vote for a presidential candidate, but even if they don’t, there are other races being decided where every vote counts for more since they usually have a lower turnout. Also, those down-ballot elections are the ones that typically make a difference in your day-to-day life even more than a presidential election. If you cast a ballot for even one race, it shows up on the voter rolls that you voted and that alone is valuable.

SE: How does one vote make a difference?

ADM: Not only do politicians look at the number of votes cast by our community, but more importantly, they also look at the percentages of how many people are registered and what percent showed up to vote. I often surprise my friends when I tell them that I keep track of whether or not they are registered and in which elections they voted. I use an Excel spreadsheet, but the political parties track that information using sophisticated software.

SE: In your experience, do politicians actively court the Jewish vote?

ADM: While the Jewish community is just one to two percent of the population, we vote at a much higher percentage than the general population, so the Jewish vote is carefully looked at by both political parties who actively reach out to our community. If politicians care so much about our votes that they are willing to spend time and money earning our vote, shouldn’t we at least take a few minutes to cast a ballot?

SE: Aside from being our civic responsibility, is there a religious component to voting as well?

ADM: Yes. The late great sage, Rabbi Moshe Feinstein, considered voting to be an important demonstration of hakaras hatov, gratitude for the benefits afforded us by this great country that has provided a safe haven for Jews. In a letter written in 1984 (see below) he said, “It is incumbent upon each Jewish citizen to participate in the democratic system which guards the freedoms we enjoy. The most fundamental responsibility incumbent on each individual is to register and vote.”

A 2008 proclamation issued by Agudath Israel’s rabbinic leadership, the Moetzes Gedolei HaTorah, stressed the importance of every single vote, noting that no individual has the right to free themselves from their obligation to cast their ballot.

SE: So back to the original question. Does it really matter if I don’t vote?

ADM: Absolutely. The chance of your voice being heard, your community’s voice being heard and Agudath Israel’s voice being heard is greater when you can show that you voted and that a high percentage of the community voted. Whatever issue you care about, it will likely be affected by the outcome of an election. If you want your voice to be heard by elected officials later when they already in office, the time to raise your voice and use your influence is now. Vote on November 8th. 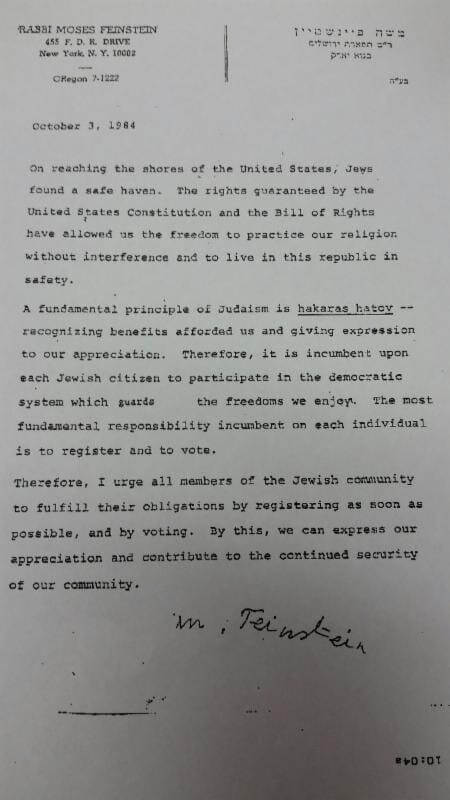