The U.S Food and Drug Administration cleared the way for the Emergency Use Authorization of convalescent plasma to treat COVID-19 this week. This decision, based on the FDA’s evaluation of the evidence of the potential risks and benefits of using plasma to treat COVID-19, is seen as a milestone. Previously, convalescent plasma was safely given to over 70,000 patients with encouraging results under the Expanded Access program, an earlier status in the FDA approval process that carries additional requirements and paperwork to provide the treatment. Now plasma can be given without such restrictions.
Convalescent plasma, used for over a hundred years, is a treatment that transfuses antibody-containing plasma from the blood of a recovered patient to patients still struggling with a disease. Currently, only convalescent plasma and the drug remdesivir have the FDA status of Emergency Use Authorization for the treatment of COVID-19. In the studies reviewed, plasma results were most striking when administered early in the disease’s progression and with plasma containing “high-titers,” or high concentrations of antibodies.
As plasma is not a drug that can be produced, its availability is entirely dependent on donors. For months, Orthodox Jewish communities in New York, New Jersey, Maryland, and around the country have stepped forward, partnering with the medical community to self-organize, donate plasma, and make this therapy available. Dr. Michael Joyner, who is leading the largest U.S. study at the Mayo Clinic in the use of plasma, has famously said that “By far the largest group is our Orthodox friends in New York City,” and “I would be shocked if they were less than half the total.”
Agudath Israel of America is proud to have been at the forefront of this campaign. Already in late March, Agudath Israel encouraged its members to donate, and worked with government, hospitals, blood centers, and research facilities to make the treatment available. Beginning in April, the Agudah partnered with the Covid Plasma Initiative, Hatzolah, Refuah Health, and others to host dozens of drives across the country. In recognition of this role, Maryland Agudah Director, Rabbi Ariel Sadwin, was asked to speak at the White House on May 7th.
Avrohom Weinstock, Esq., Agudah’s chief of staff and the driving force behind Agudah’s plasma campaign, said, “The Agudah is grateful to the thousands of donors who have stepped forward to open their veins and their hearts to make this treatment available to save lives. The tireless organizers, organizations, and donors I have had the privilege of partnering with over the past months demonstrate the altruistic spirit of the Jewish people and their value for human life, even before it was known just how impactful their efforts would prove to be. The FDA’s findings this week, no doubt aided by the large sample size it had to draw upon, validate that dedication.”
The next plasma drive is being organized by Agudath Israel and the Covid Plasma Initiative at the Kingsway Jewish Center in Brooklyn on September 1. Eligible donors can register here. 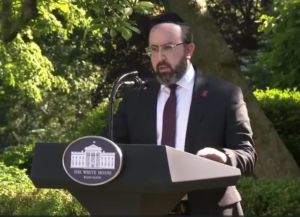 Rabbi Ariel Sadwin, Director of Agudath Israel of Maryland, speaking at the White House National Day of Prayer in May, 2020, following his extensive involvement in the plasma campaign.