Referring to Agudath Israel as a “valued liaison” and a “diligent advocate for the Jewish community,” the award presentation further noted the organization’s “invaluable service and continuing contributions” to TSA, as well as its role in “ensuring that the traveling public is treated in a fair and lawful manner.” Agudath Israel is the first Jewish group to be recognized by the agency with the partnership award.

“We are honored and gratified to be given the opportunity to serve our nation and our community in this way,” noted Rabbi Cohen in his remarks. “Security continues to be of utmost concern and we will continue to work diligently to develop ‘reasonable accommodations’ that satisfy both our nation’s safety priorities and Jewish religious requirements.” 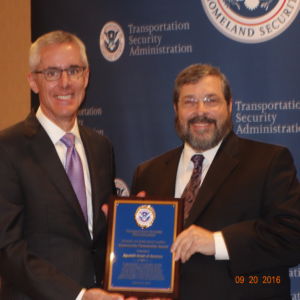 Agudath Israel was recognized because of its leading and longstanding role in advising and educating the agency and its security personnel in regard to Jewish beliefs, practices, holiday observances and ritual items. The insight afforded the TSA into these matters has helped to prevent many potential problems and mishaps involving Jewish travelers. Areas of cooperation have included efforts to end explicit x-ray imaging of passengers, curb unnecessary or intrusive pat downs, and provide private rooms for searches – as well as the issuing of notices, web postings and field briefings circulated during Jewish holiday travel seasons.

Most recently, Agudath Israel developed a “Judaism 101” webinar for TSA personnel, for the purpose of familiarizing them with the wide scope of Jewish daily and holiday practices and pointing out the kinds of problems that might arise at security checkpoints, airports and other locations. The webinar, which is shown at various intervals over the course of the year, also offers solutions and “best practices” to address those issues.

The TSA Coalition — which is affiliated with the agency’s Office of Civil Rights and Liberties, Ombudsman and Traveler Engagement — includes leaders from hundreds of organizations representing various religious, cultural and disability communities. Each year, as a highlight of its annual conference, the agency presents the Community Partnership Award to two leading advocacy groups, one from the religious/cultural community and the other from the disability community. This year, Agudath Israel received the former; United Ostomy Association of America received the latter.

“The TSA has been both receptive and responsive to the manifold concerns of the Jewish community,” Rabbi Cohen observed. “It has truly been a partnership, where both sides work together to find solutions to sometimes complex problems.” Over the past two decades, in addition to its work with the TSA, Agudath Israel has been engaged with other homeland security agencies on a range of Jewish community issues, including disaster relief, security grants, immigration and border protection.