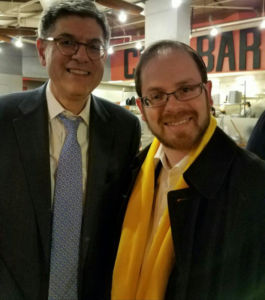 In synagogues across the country tomorrow, congregations will say a prayer for President Donald Trump, Vice President Mike Pence and their many advisors. It is the same prayer those congregations offered last week and for the last eight years for the previous office holder of the highest elected office in this land. No matter who occupies the White House, it is a longstanding Jewish tradition to “pray for the lives of the leader and his children” (Ezra 6:10) and “for the peace of the government” (Avos 3:2). And no matter who occupies the White House, Agudath Israel develops and maintains high-level relationships so that we can properly represent the interests of the Orthodox Jewish community.

While in DC this week, I bumped into (now-former) Treasury Secretary Jack Lew and thanked him for his service to our country and, as a highly visible Orthodox Jew, for earning the respect of members of both political parties. He in turn, sent best regards to our man in Washington, Rabbi Abba Cohen. It was a reminder of the important work Rabbi Cohen does representing our community to the federal government. Rabbi Cohen has already met with members of the transition team and congressional leaders and I look forward to his reports in the weeks ahead. 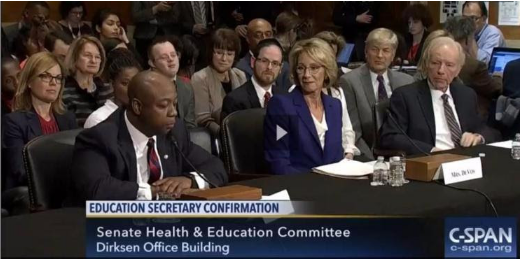 Although Agudath Israel doesn’t generally weigh in on cabinet nominations, Education Secretary-designate Betsy DeVos was an exception. Agudath Israel has worked closely for the last fifteen years with Mrs. DeVos, and the various organizations she headed, to expand school choice across the country. On Wednesday, I attended the confirmation hearing of Mrs. DeVos as her guest and was honored to sit in the front row (thank you to all those who texted or emailed me letting me know that you watch C-Span!). One of many thoughts that struck me during the three hour hearing, was how many times Mrs. DeVos mentioned children and parents in her responses. Betsy DeVos will be a champion for all children and a passionate advocate for education. We look forward to working with her once she is confirmed.

However, school choice is essentially a state, not a federal issue and my team around the country have their hands full in states around the country. In the last few weeks, governors in various states (including Maryland, Missouri, Nevada, and Texas to name a few) have delivered state of the state addresses or discussed legislative priorities which include the creation of new school choice programs and expansion of existing programs.

Finally, in advance of National School Choice Week, The Florida Supreme Court finally dismissed a teachers union lawsuit that attempted to end a scholarship program serving low-income families. It will truly be a school choice celebration for the nearly 100,000 students benefiting from those programs in Florida.