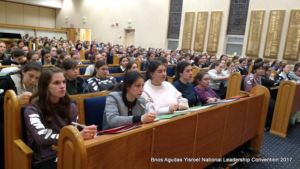 A record number of Bnos Agudas Yisroel leaders gathered in Baltimore this past Shabbos for the national Bnos Leadership convention, enjoying a fabulous weekend offering motivational messages, hands-on tips and a golden opportunity to connect with their peers nationwide.

The theme of this year’s annual convention was Shalsheles, imbuing each of the more than 400 high-schoolers in attendance with the critical understanding that they are part of a chain stretching back to pre-World War II Europe that continues proudly today, extending onwards to the future. Bnos leaders came from more than 30 cities, with some traveling from as far away as Denver and Los Angeles to take part in the national event.

Friday dawned brisk and chilly, but the Bnos leaders sprang into action, spending the morning at Stratosphere Trampoline Park and hearing dance 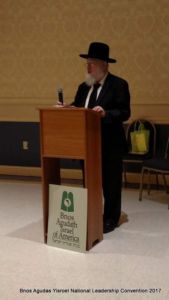 instructor Michelle Penn share how she gave up a professional career to become a baalas teshuva. The convention ushered Shabbos in on a high note, with a heartfelt davening followed by a ruach-filled seuda at Bnai Jacob Shaarei Zion. The heartwarming words of Bais Yaakov of Baltimore principal Rabbi Yitzchak Sanders told the girls that they are each an essential link in the chain of our mesorah. Capping off the night was a panel discussion, an oneg Shabbos and a special choir performance.

Shabbos day was filled with beautiful meals, achdus and inspiration. A panel discussion led by Mrs. Gittie Horowitz and Ms. Leah Wolf addressed dealing with problems that can crop up during a Bnos group. Bais Yaakov of Baltimore principal, Rabbi Naftoli Hexter, praised the girls’ dedication and declared that they are planting the seeds for the future of klal yisroel with every Shabbos group they lead.

A Motzei Shabbos melava malka offered a final opportunity to soak up the wonderful atmosphere of the convention, with the girls enjoying music and dancing as well as uplifting words from Rabbi Ariel Sadwin, director of Agudath Israel of Maryland and the Mid-Atlantic region.

More than three days spent enjoying the company of their peers and polishing their skills, Bnos leaders are able to take the practical advice and heartfelt encouragement that they absorbed over the weekend home with them and share them with their fellow local Bnos leaders, transmitting the convention’s lessons to thousands of others. Equally important, noted Mrs. Hass, is that the national convention gives Bnos leaders concrete proof that they are part of a much greater whole – Bnos Agudath Israel of America.