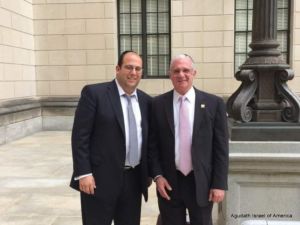 Thanks to a bill initiated by Agudath Israel of America in response to an incident at a local college last Yom Kippur, New Jersey students will no longer be forced to choose between observing their religion and facing academic penalties.

Under previous New Jersey law, college students who miss an exam due to a religious holiday were guaranteed an alternate exam date. However, the law was limited to exams and did not prevent a student from being penalized for missing classes due to a religious holiday. This glaring omission from the law was highlighted by a situation that arose last Yom Kippur. After a student missed two days of classes on Rosh Hashana, her professor notified her that she would fail the semester if she missed any more classes. Caught in a no-win situation, the student had to decide whether to observe Yom Kippur or pass the semester.

When Rabbi Avi Schnall, New Jersey Director of Agudath Israel, learned of the incident, he approached Assembly Deputy Speaker Gary Schaer (D) to request his assistance. In response, Assemblyman Schaer introduced Assembly Bill A3440, which states that an “institution [of higher education] is not permitted to impose any type of penalty on a student who is unable to attend class for reason of a religious observance.” Concurrently, Senator Vin Gopal (D) introduced an identical bill in the State Senate. Both bills were passed unanimously in their respective chambers.

Agudath Israel expresses its gratitude to Governor Phil Murphy for supporting and signing this important amendment to the law.

“We’re grateful to Assemblyman Schaer for his leadership and initiative on this important matter, as well as to Assemblyman Karabinchak and Senator Gopal, who were primary sponsors of the bill,” says Rabbi Schnall. “New Jersey students should never be penalized for their religious beliefs.”