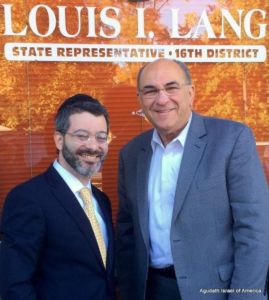 A $25 million security grant-making program for at-risk nonprofit agencies and institutions was signed into law by Illinois’ Governor Bruce Rauner last Friday. Agudath Israel worked to advance House Bill 4011, sponsored by House Deputy Majority Leader Lou Lang (D-Skokie) and Senator Ira Silverstein (D-Chicago), which would provide up to $25 million for organizations to pay for security guards, target-hardening capital projects, and other security measures. Agudath Israel is grateful to the Governor for heeding its request to sign the bill.

The grant program is now law but still needs to be funded. This can be done by passing a separate appropriations bill, or can be included in the next state budget. As such, Agudath Israel of Illinois will be focusing its efforts on obtaining the funding. The overwhelming bipartisan support for the bill in both legislative chambers is an acknowledgement that real threats exist to the security of many communal institutions including schools, synagogues, and community centers. Hopefully that recognition will translate into support for funding the program. “While Illinois’ financial health remains in somewhat critical condition, security measures necessary to ensure the safety of its citizens is a primary function and responsibility of government,” said Rabbi Shlomo Soroka, Agudath Israel of Illinois’ director of government affairs. “We need to be proactive, not reactive regarding these kinds of threats.”